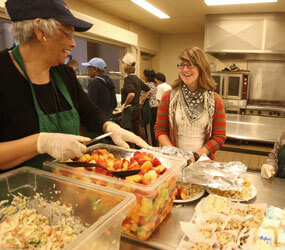 There is much laughter in the Project SERVE house on Mulberry Street as the young adults, who have come here for a year-long Peace Corps-style experience, explain what led them to the Catholic Charities program.

The six participants collapse into comfortable couches in the living room of their four-story row house, eager to share their forays into the world of serving others.

Project SERVE welcomes students from across the country, offering them a chance to live – rent-free – in community while working for one of Catholic Charities’ agencies in Baltimore. They get health insurance, a stipend of $264 a month and they can defer their federal student loans. When they complete the one- or two-year program, which is part of AmeriCorps, they can receive from $2,600 to $5,200 toward their student loans or graduate school tuition.

The program gives them a chance to serve others while also sorting out who they are and gaining real-world experience.

“I majored in music and I thought that was what I wanted to do,” said Caitlin Baummer, 22, from Massachusetts. “But I developed a passion for service work in college. I had spent so much time in music – I wanted to devote a year to service and see where that took me.” She’s working at Sarah’s House.

“Every day at my work challenges my faith in ways I never could have expected,” she says. “I drive away from work thinking how did they end up there and how did I end up here. Regardless, we’re in each other’s lives.”

Vermont native Rebecca Horner, 23, who majored in English in college, is an assistant volunteer coordinator at Our Daily Bread, working with between 30 and 60 volunteers every day. She enjoys “the opportunity we all have to work every day with people with way more experience.”

Kelly Brown, 25, an anthropology major from Florida, said, “I’ve learned to be so grateful.” Her family was not affluent, “but we weren’t poor. My parents took care of everything. I took a class called Just Faith because I wanted to see what the church was doing about Catholic social teaching.” She jokes that her time here is an exercise in trust “because I don’t know where I’ll be next year, but I’m taking that time to trust and be in the moment.”

Young adults do not have to be Catholic to take part in Project SERVE.

Boston native Faith Savill, 22, who studied Latin and art history, is doing volunteer outreach for My Sister’s Place. She pointed out that “your clients aren’t all of one faith, nor should they be.”

Baltimorean Ian McArdle, 22, a graduate of Calvert Hall College High School and Wagner College, interned with Catholic Charities while in school, but now, as a case worker at Christopher’s Place, he’s adapting to the demands of the working world.

Bethany Moore, 22, from Ohio, found it a little scary to move to a city where she didn’t know a soul but said with a laugh, “I’m from a Catholic family. I knew what Catholic Charities was – we gave to it. I get to move out of my parents’ house. As much as it’s a year of service, let’s be honest – we’re helping ourselves.”

Brown is quick to agree. “We get a lot out of it,” she said.

Allison Stone, the coordinator of Project SERVE, said Catholic Charities gets a lot out of the arrangement, too, especially from the enthusiasm and perspective the young adults bring.

“The programs get a lot of energy,” she said.

Bill McCarthy, executive director of Catholic Charities, said, “What I find, year in and year out, when I talk to them and ask them why they’re doing this, they’re a heck of a lot more thoughtful than we ever were.”

Stone said the program usually has six or seven participants, who serve for 11 months and can opt to stay for a second year. They go on three retreats during their year, pool money for food and share chores, and they agree to be home together two nights a week. The program does not require mandatory church services, but participants sometimes attend together, and they spend a lot of time talking about faith and spirituality.

“Our strengths and weaknesses really complement each other,” Baummer said.

If it were not for the support of the community as they venture into the post-college world, Savill said, “my mom’s phone would be ringing every day.”

Around 20 to 25 applicants between the ages of 21 and 30 apply for the slots every year. They first interview with Stone and then with the Catholic Charities site where they’ll be working. “It’s a kind of matching,” Stone said.

It’s a system that works well.

“We are all ridiculously suited for our jobs,” Moore said.