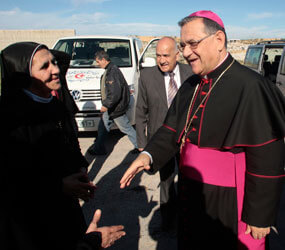 JERUSALEM – Although politicians have failed to reach a solution to the ongoing Israeli-Palestinian conflict and Palestinians still face occupation, house demolitions and separated families, hope is still alive in the Holy Land, said Latin Patriarch Fouad Twal of Jerusalem.

“In the Holy Land, everything is not desperate. There are a few signs of hope,” he told journalists at a Dec. 22 press conference to present his Christmas message.

As signs of hope, he mentioned the partial freeze on the construction of Israeli settlements in Palestinian territory and the removal of more than 50 checkpoints within the West Bank, which has “markedly improved the freedom of movement” for Palestinians and improved the economic situation.

However, he said, although “it is a step forward, it is not enough,” and all illegal settlements are an “obstacle to peace.”

Patriarch Twal said a “courageous gesture” was needed to establish a peaceful resolution to the Israeli-Palestinian conflict. He said Palestinians are beginning to express their resistance in more nonviolent ways.

He also said the financial support of the international community is a sign of hope and greatly appreciated.

Although the spring pilgrimage of Pope Benedict XVI did not bring about any political change it encouraged the spiritual faith of the local Catholics and brought pilgrims to the Holy Land, which resulted in some 2.7 million visitors, equaling the record number who visited in 2000 and giving a boost to the languishing Palestinian economy.

“We have received much assistance and many gifts but the best gift we seek … is peace,” Patriarch Twal said. “Peace is a gift of God for men of good will. We have to deserve it. We are sure that there are many men and women of good will among Israelis and Palestinians. We pray that one day, the beautiful vision of Isaiah will become a reality.”

In his message he spoke of his traditional pre-Christmas pastoral visit to Holy Family Parish in the Gaza Strip two days earlier. He emphasized the difficulties caused by the Israeli-imposed economic siege of Gaza, in place since 2007, when the militant group Hamas took control of the territory; the lack of freedom of movement; and the contamination of Gaza’s water.

He said Catholics in Gaza were still awaiting permits to travel to Jerusalem to pray.

“We hope Israel will give these as soon as possible,” he said.

The patriarch said about 300 Catholics lived among Gaza’s 3,000 Christians.

“The situation in Gaza is, every day, the same,” he said. “The Christian population is an integral part of that population which is suffering. It has the same problems as the rest of the population.”