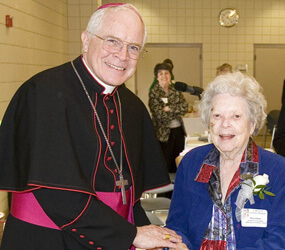 A parishioner there for 74 of her 95 years and known as the parish “matriarch,” she was honored as a Woman of Achievement in the Diocese of Tulsa.

“Congratulations! God bless you,” Bishop Edward J. Slattery of Tulsa told Baker when she came forward to accept her commendation at a recent Diocesan Council of Catholic Women luncheon.

Mrs. Baker moved to Poteau in 1935, with her late husband, Wilbur, and their 1-year-old son, Kermit, now a physician who accompanied her to the luncheon. She has five grandchildren and 14 great-grandchildren.

Mrs. Baker quickly started wearing many hats. She became the parish organist – playing for all Sunday Masses, weddings and funerals. In addition, Mrs. Baker became the choir director and for many years organized the children’s choir.

In addition, she became bookkeeper and treasurer for her church and two others. For 50 years she counted collections, made bank deposits and paid bills by hand – until she learned to use a computer.

Over the years Mrs. Baker helped purchase, prepare and serve the food for all the funeral dinners. During her 74 years of parish service, she has worked with 18 different priests who were fresh out of the seminary.

At age 86, Mrs. Baker survived colon cancer, getting through surgery and chemotherapy. She slowed down, and at 92 she decided it was time to resign as bookkeeper and treasurer.