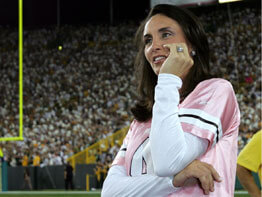 The football star’s wife was diagnosed with breast cancer in 2004. She spent four months undergoing chemotherapy and radiation treatment. The following year, after her last radiation treatment, Deanna was declared cancer-free. She says the life-changing experience brought her closer to her husband and her Catholic faith.

“I just feel like, with faith, it helps me see the good in everything,” Deanna said in a telephone interview with The Compass, diocesan newspaper of Green Bay.

The Favres are members of St. Agnes Parish in Green Bay during football season and St. Thomas Aquinas Parish in Hattiesburg, Miss., during the off-season. Brett and Deanna both grew up in Kiln, Miss.

Since overcoming breast cancer, Deanna has become a spokeswoman for breast cancer prevention. She founded the Deanna Favre HOPE Foundation in 2005, which provides grants for uninsured and underinsured women battling breast cancer.

Deanna’s latest fundraising effort is the Oct. 1 release of an autobiographical book, “Don’t Bet Against Me: Beating the Odds Against Breast Cancer and in Life,” which she wrote with Angela Hunt.

According to Deanna, stepping into the media spotlight wasn’t something she wanted to do but she believes it was part of God’s plan.

At the time she was diagnosed, she and Brett were dealing with several family tragedies, including the death of her younger brother and Brett’s father.

Deanna also quickly learned that dealing quietly with her personal struggles wouldn’t be possible. She resented the fact that her diagnosis made front-page headlines but she also came to understand that good could come from the publicity.

She began receiving letters of encouragement from women around the country. She also received letters from women saying they were motivated to get breast examinations after hearing about her.
She said for that reason alone she thinks her story was meant to be public.

Today, Deanna said her views on life have changed. She no longer takes life or relationships for granted, and she cherishes every day with Brett and daughters Brittany, a college freshman, and 8-year-old Breleigh.

To date, her foundation has raised about $500,000. Part of the book’s proceeds will go to the foundation. The book, “Don’t Bet Against Me,” released during breast-cancer-awareness month, not only details her battle with cancer but tells how she coped with other life challenges, including a pregnancy at age 19, single motherhood and a rocky relationship with Brett because of his addiction to prescription painkillers.

Their Catholic faith was a key factor in Brett and Deanna’s decision not to have an abortion when she became pregnant out of wedlock following her second year of college.

“We were always totally against (abortion),” she said, adding that putting their baby up for adoption was also not a consideration.

Deanna said she “knew premarital sex was wrong, but for whatever reason” did it anyway.

“I knew I would keep the baby,” she said. Having Brittany meant that Deanna had to put her career goals on hold, but she said she was determined to do whatever she could to bring her up.

During Deanna and Brett’s on-again, off-again relationship during college and his early NFL career, Deanna said she often turned to prayer. The couple married in July 1996.

Today, Deanna describes her relationship with Brett as stronger than ever.

“All the stuff we’ve been through over the years has molded us into two different people. It’s awesome to think where we started and where we are now,” she said. “Our relationship has gotten to a much stronger point, a deeper love; we have so much respect and love for each other.”

“Brett is a completely different person and I can see the power of prayer in just that. It’s changed our lives, our family.”

Deanna said she still prays for her husband for a lot of different reasons and in particular she prays for his protection on the football field each week.

Contributing to this story was Maryangela Layman Roman in Milwaukee.