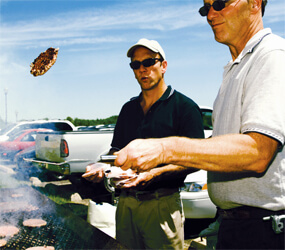 Crab cakes and football. That’s what Maryland does.

Those things meet frequently on fall weekends at pre-game tailgates around the state. From fans piling into the parking lots of M&T Bank Stadium, to grills outside the Redskins’ FedExField and the University of Maryland’s Byrd Stadium, people are ready to consume massive amounts of calories with the start of the football season.

“What do I not love about game days? I’ve been longing for it,” said Ravens season ticket holder Molly Lauryssens of the game experience. “There’s such an energy that goes along with game day. You can walk up to someone you don’t know and just start talking to them. This is a perfect time to be with our friends.”

Both the Ravens and Maryland had home contests last weekend, and the aroma of burgers, sausages, Old Bay seasoning and alcoholic concoctions could be smelled blocks away.

The words “Pass me the tofu” were probably used sparingly, but that doesn’t mean there aren’t those trying to turn the corner.

Lauryssens, a 40-year-old Catholic freelance writer, tailgates every week with her husband, Neil, and other jersey-clad, rabid fans. This year, the Lauryssenses are attempting to find out if there is room for healthier options after spending their summer on diets.

When the Ravens opened the season against the Kansas City Chiefs Sept. 13, Lauryssens was adding premium steaks, shrimp, chicken wings and crab cakes to old standbys like hoagies, hamburgers, chips and dips.

Tailgaters often arrive hours before kickoff to set up makeshift eating areas on decorated vans, busses and sports utility vehicles. Soon after, the chips and drinks consumption begins in earnest.

Some stores, like Whole Food Market in Baltimore City’s Harbor East neighborhood, have natural and organic options. Beth Laverick, the store’s marketing specialist and community liaison, said her store regularly has patrons looking for platters to take to a game, like Army-Navy.

“When there’s a big event,” Laverick said, “we get a lot of people.”

Of course, people heading to games often gravitate to the old standards.

“It’s always tempting to come in for the seven-layer dips or the giant cookies in the bakery,” Laverick said. “I think a healthier tailgate might help someone maybe feel not so guilty.”

Recently, Laverick’s husband asked her to pick up a tailgate-staple, bratwurst. Instead, she brought home a chicken sausage, which contained less fat and it proved successful.

Whole Foods, Laverick said, offers ground beef with a low percentages of fat and boneless chicken breast without skin. That low-fat meat can be used with generous portions of beans for chili.

Instead of hot dog or hamburger buns, Laverick has said she will often use English muffins at tailgates.

Food aside, Lauryssens said she is just excited to be with friends and filled with Super Bowl hopes.

“I don’t know how we cannot have big expectations,” said the Ravens fan.