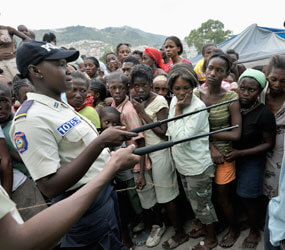 PETIONVILLE, Haiti – Hundreds of people lined up in the center of Petionville early Feb. 1 as the U.N. food distribution system began making its way into the neighborhoods and suburbs of Port-au-Prince.

Nearly three weeks after the Jan. 12 earthquake destroyed large portions of the metropolitan area and beyond, the U.N.’s World Food Program made its first visit to suburban Petionville, located in the hills overlooking the Haitian capital.

As hundreds of people flocked to the Petionville City Hall to register for cards entitling them to a 110-pound sack of rice, a slightly smaller group of people waited patiently for their allotment outside the National Police station fronting the town’s central park.

“I’m very happy,” said Daniel Jonel, 26, as he waited behind a security detail made up of U.N. peacekeepers from Nepal backed by members of the U.S. Army’s 82nd Airborne Division. “I feel good.”

Jonel told Catholic News Service that, a day earlier, he had waited in line for five hours to get the cherished food entitlement card. He planned to share the rice with friends staying in the tent camp that has filled every corner of the park.

Dozens of people waited in line as aid workers from GOAL, a humanitarian agency based in Ireland, checked cards and registered the people made homeless by the earthquake. The recipients then walked to the back of two panel trucks where Haitians hired to distribute food unloaded the sacks.

A GOAL worker, who asked not to be identified because he was not authorized to speak for the World Food Program, said the agency was helping to deliver four panel truckloads of rice donated by Brazil and Spain. He said the program was aiming to feed 1,700 people a day at 15 distribution sites around Port-au-Prince and its suburbs during a two-week period.

Some jostling was evident in the lines and at least one fight broke out among a group of men over a bag of rice. A Haitian police officer stepped in to break up the altercation. No injuries were apparent.

U.S. Army Capt. Glen Carr said the hundreds who lined up were “amazingly calm” given their desperate situation.

Just yards away, dozens of people waited patiently for their chance to get food. Most said they had no cards but that they hoped to get any rice that might be left over after the distribution to people with cards.

One woman stood on crutches in a designated area for pregnant women and people with disabilities. Mary Clare Eugene, 52, who lifted her skirt to show that her left leg had been amputated just above the knee years ago, said she was desperate to get a sack of rice. She was unsure of how she was going to carry the heavy load to her tent made of sheets in the park, about 200 feet away.

“I don’t have any hope (of getting anything) because I don’t have a card,” Eugene said with tears welling. She said her husband died in the earthquake when their Petionville home collapsed. “I’m hungry,” she added.

On another side of the park, people gathered at City Hall to await the card distribution. Some reported arriving as early as 6 a.m., just before sunrise. Most said they had returned to the line for several days but were not able to obtain a card.

The line early Feb. 1 extended for a full city block and a short distance around the corner. One line was for women and another for men. In both lines people pressed tightly against each other, hoping to be admitted to the City Hall grounds when aid workers arrived.

Women easily outnumbered the men, although the men were the most vocal in expressing their frustration in not getting a card.

“They tell the people to come to get the cards, but they spend all day here and don’t get any cards,” said Junior Champagne, who arrived from Jacmel a week earlier to try to get assistance for his parents. He said he came to the Port-au-Prince area because aid to his hometown of Jacmel, southwest of the capital on the Caribbean Sea coast, was slow in being distributed.

“Everyone here needs help,” he said. “I don’t know what to do.”
Regnesple Devilme said he had showed up for the card distribution every day since Jan. 26, but never got the piece of paper that would help him feed his wife and five children.

“They took my name, but gave no ticket,” he said.

Marieloude Calix reported that despite being in line on three consecutive days, “I cannot get a card.”

Even though her home received only minor damage from the earthquake, Calix said her family is afraid to return to it because they fear another massive earthquake. For now the family is living in the park.