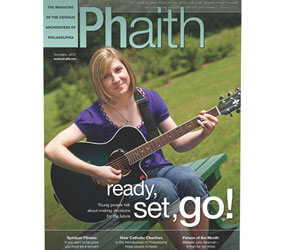 PHILADELPHIA – Beginning in September, Catholics in the Philadelphia Archdiocese will have a new publication to look for in their mailboxes.

Phaith ¬ a monthly magazine – will be mailed free of charge to every registered Catholic home in the archdiocese, including the homes of the 75 percent of Catholics who do not attend church on a regular basis, said Matthew Gambino, director and general manager of The Catholic Standard & Times, the archdiocesan newspaper.

Along with the new publication, the Standard & Times will go from a weekly newspaper to a monthly – with a larger projected circulation per edition, Gambino said. At the same time, it will increase its growing Internet presence through daily news updates and increased content.

The magazine, which is set to be launched in mid-September with a press run projected at 350,000, will be locally written and will tell the faith stories of local people in an attractive format and engaging style.

The magazine will be published through an outside source, Faith Catholic in Lansing, Mich., and will be similar in format to a number of magazines Faith Catholic produces for other dioceses.

The difference between the newspaper and the magazine will be in emphasis, Gambino said.

“Whereas the newspaper will continue to favor news and commentary with a component of evangelization and catechesis,” he said, “the magazine will flip the model, offering primarily content with the intention of evangelization.

“Basically a reader will learn how another person is living out his or her faith in Jesus as a Catholic in some interesting fashion, designed for long shelf life in the home. There will also be catechesis and a news component, mostly briefs.”
The new format is especially exciting, Gambino said, “because it will be going into so many homes and it is storytelling – telling of people in love with their faith and alive with their faith. It will be a light to people who are not necessarily engaged with the church. That’s what makes it exciting. As Pope Benedict would say, the new evangelization is showing the beauty of friendship with Jesus. That is what the magazine will do.”

The last weekly issue of the Catholic Standard & Times will be June 30, with biweekly issues in July and August, and monthly issues beginning in late September.

The newspaper has been published as a weekly since the 1895 merger of two older papers, the Catholic Standard and the Catholic Times. In its heyday, before television and the Internet, it had a circulation well in excess of 100,000.
In the most recent decade, 2000-2010, circulation has dropped from 85,185 to 31,240, a loss that the self-supporting paper cannot sustain.

The paper has relied on three principal means of distribution – regular subscribers, bulk sales to parishes and the parish coverage program, in which parishes paid to subscribe all or some parishioners.

In 2002, well more than half of sales, 41,952, were through total parish coverage. By last year, this figure stood at 8,533 as most participating parishes – experiencing tighter budgets and lower church attendance – dropped the coverage.

While individual subscriptions and bulk sales also suffered, the drop was not as extensive. Advertising revenue also has fallen off.

Under Philadelphia’s new monthly model, total parish coverage is replaced: Each parish, high school and archdiocesan nursing home will receive 150 free copies of the monthly paper, with an opportunity to purchase more. This, coupled with home subscriptions, will equal 60,000, which, in turn, should produce higher advertising sales revenue.

The majority of the distribution of the monthly newspaper will be bulk, this cost should drop dramatically once the changes are implemented. The subscription price for The Catholic Standard & Times will drop from $30 to $15.

Phaith magazine will attract advertisers who are seeking a large audience, said Gambino. While he does not expect it to break even the first year, he believes it will in subsequent years.

The third component, the digital newspaper, carries virtually no cost and reaches out to younger people who only get their news through various electronic means.

The electronic version will include all the content of the newspaper and more, and will be updated in real time rather than a specific day and is expected to generate advertising revenue.

Under the new model, the newspaper and magazine will operate with fewer personnel.

Among the five laid off is Christie L. Chicoine, the paper’s sole staff writer. Her last day at the paper will be April 1. A native of the Diocese of Sioux Falls, S.D., Chicoine has written for the paper for nearly 19 years.

Two years ago, six staff members were laid off, also because of budget constraints.

“It is not a reflection on their abilities, their professionalism, or on them as people,” Gambino said. “They are all wonderful people and extremely dedicated professionals, but … the budget necessitates hard choices.”

The paper expects to rely mostly on freelance writers for its content, Gambino said.

“I’m really optimistic,” Gambino said. “For the first time in many years, this sets us on a path for growth rather than managing a decline.”