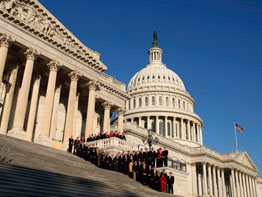 WASHINGTON – About the only thing everyone with a stake in it is likely to agree on about the Freedom of Choice Act is that the legislation has languished in Congress for 20 years, only once rising – just barely – above the fate of hundreds of bills that are introduced each session and never heard from again.

What’s harder to nail down is whether the bill, known as FOCA, is going anywhere under the 111th Congress that begins in January.

Although there was no effort in the 110th Congress to move the bill along, pro-life organizations have since the summer been sounding the alarm about what would happen to current restrictions on abortion if a Democrat was elected president.

They also voice concerns for possible administrative actions under Democratic President-elect Barack Obama, such as reversing the ban on federal funding of embryonic stem-cell research; and repealing the Hyde amendment, which bars federal funding of abortions, and the Mexico City policy, which prohibits foreign aid money from going to family planning programs that promote and offer abortion.

But stopping FOCA has become the rallying cry for the American Life League, the National Right to Life Committee and Priests for Life, among other pro-life groups. It was the central focus of a statement about the government transition issued Nov. 12 on behalf of the U.S. Conference of Catholic Bishops by its president, Cardinal Francis E. George of Chicago, during the bishops’ general fall meeting.

A legal analysis of the most recent version of FOCA by the general counsel’s staff of the USCCB warned that it would wipe out many existing state laws and impede states’ ability to regulate abortion.

The analysis cited as examples laws that could be overturned if FOCA became law such as: parental notification requirements; abortion clinic regulations; bars to government funding of abortion; prohibitions on procedures such as partial-birth abortion; and laws protecting the right of medical personnel and institutions to decline to participate in abortions.

In statements by pro-life leaders, much of the concern about FOCA refers to President-elect Barack Obama’s July 2007 answer to a question during an address to a Planned Parenthood group that signing the bill would be “the first thing I’d do as president.”

But that presupposes FOCA gets out of Congress.

Spokesmen for House Speaker Nancy Pelosi of California, Senate Majority Leader Harry Reid of Nevada, Senate Judiciary Committee Chairman Sen. Patrick Leahy of Vermont, and the bill’s chief sponsor, Sen. Barbara Boxer of California, all declined to discuss the prospects of any specific bill in a legislative session that doesn’t start until January.

All pending bills expire at the end of each two-year congressional session, so FOCA would have to be reintroduced.

Erica Chabot, press secretary to the Senate Judiciary Committee, said she can’t recall Sen. Leahy “ever mentioning this piece of legislation.” That doesn’t necessarily mean it couldn’t suddenly move up on the committee’s priority list, she said.

However, “if there were overwhelming support for a bill, chances are I would have heard something about it,” Chabot told Catholic News Service.

Kristin Day, executive director of Democrats for Life, called FOCA a radical bill, but while it’s worthwhile to highlight its problems, “I don’t think it’s likely to pass anytime soon.”

Day said it’s more likely that administrative orders will reverse the Mexico City policy or expand federal funding of embryonic stem-cell research. She wonders why there isn’t more effort being put into highlighting opposition to such changes.

At a Democrats for Life event during the Democratic National Convention, Sen. Bob Casey, D-Pa., called FOCA “dead on arrival,” Day said. She said pro-life Democrats including Casey and Reps. Lincoln Davis of Tennessee and Heath Shuler of North Carolina, who backed President-elect Obama during the campaign, expect their voices to matter when it comes to the legislative priorities of the White House.

Douglas Johnson, legislative director for the National Right to Life Committee, told CNS that FOCA’s inertia so far doesn’t diminish the danger of it progressing now.

FOCA moved forward only in 1993, when Democrats controlled the House, Senate and the White House for the first time in 12 years. Introduced in the first days of the 103rd Congress, the House and Senate Judiciary committees quickly moved it on for floor scheduling within weeks.

But it never came up for debate or a vote in the House or Senate.
Mr. Johnson is skeptical that pro-life congressional Democrats are numerous enough or powerful enough to stop a serious push to move FOCA forward if the party’s leaders want it to advance. He is especially skeptical of whether the Senate majority leader would prove any obstacle to FOCA, despite Sen. Reid’s pro-life voting record.

“Reid would be no impediment at all,” he said. “His history has been that he may vote against something in the end after doing everything he can to have the pro-abortion side win,” for instance by putting a bill on the floor for a vote.

Mr. Johnson acknowledged that it’s unclear that either house of Congress has the votes to pass FOCA. He said there are more supporters of legal abortion in Congress than there were in 1993, though that doesn’t necessarily translate to votes for the bill.

NARAL Pro-Choice America, which supports FOCA and opposes any restrictions on abortion, counts both the House and Senate next term as having pro-life majorities. It projects 204 House members who generally oppose NARAL’s agenda, and 185 who support it. It says another 46 members have a “mixed” record. NARAL counts 42 opponents of its issues in the Senate and 40 supporters, with 18 of “mixed” records.

Mr. Johnson credits a nationwide postcard campaign opposing the bill in 1993 with helping keep it from reaching a vote. But the makeup of Congress has changed significantly since then, he noted.

“Many of the current members of Congress weren’t members in 1993,” he said. “Lots of lawmakers have never paid any attention to FOCA.” He said that raises the risk of “the other side” defining FOCA as more benign than how abortion opponents interpret it. FOCA opponents plan a new postcard campaign beginning in January.

She said CHA has always opposed FOCA and will continue to do so. But “even if this bad legislation were to pass, we would not be forced to participate (in providing abortions) and we will fight for that,” she said.

First, however, Sister Carol said, “we must focus on protecting mothers and their unborn children.”

“The first thing we are called to do is redouble our efforts to be sure pregnant women do not see abortion as their only option,” she said in a statement released Nov. 24. Easily accessible and high quality obstetrical care, assistance with food stamps, housing, education and child care, can help women feel they have options other than abortion, she said.

She said CHA has been in touch with Obama’s transition team, as they were with Sen. John McCain’s aides when they were planning a possible transition.

“We’ve found (Obama’s staff) more than willing to discuss our perspective,” she said. “They recognize we play a fairly significant role in health care and are a large part of the social safety net.”