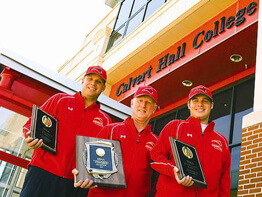 Not too shabby, going 75-0 in one season. That’s the cumulative record of the Calvert Hall College, Towson, baseball program that recently wrapped up their seasons.

The Cardinal’s baseball program opened with the freshman team who went 16-0, followed by the junior varsity team who finished 26-0 and capped off with the varsity program who posted a 33-0 overall record, giving head coach Lou Eckerl his 200th career win.

The Cards are ranked fourth in the nation by USA Today, second in the East Region and listed in the Top 25 of Collegiate Baseball and Baseball America.

The varsity red and gold have now put together a 91-8 record over the past three years and with the freshman and junior varsity teams posting equally stellar records, the Cardinals are poised for continued success.

“It’s the Calvert Hall Way,” said Eckerl. “It’s hard work by the players and the coaches, it’s the buy-in by the kids and it’s respecting the game.”

Respecting the game is one theory, but with the overwhelming talent steeped within the ranks of the program, players know that if they don’t continue to improve their own game, someone will surely come along and take their place on the team. No one can remain stagnant and expect to see significant playing time at Calvert Hall.

During tryouts, usually 100 students will come out for the team and, on average, 65 players will make the cut. What’s unique, yet telling, is that almost every student-athlete who shows up during tryouts is a product of Calvert Hall’s summer baseball camp, with some baseball enthusiasts attending the camp faithfully since the age of 5.
The varsity squad has now won three consecutive MIAA championships as the team was led by Jeff Guthridge, Kevin Lingerman, Reid Chenworth, Patrick Blair and Mike Dillon. Those five got a lot of well-deserved ink during the season but Eckerl was quick to point out that Cody Schuchman, Bobby Corton, Joe Robak and John Collingsworth made sure there were no weaknesses in the Cards defensive or offensive product.

Junior Varsity head coach Chris Bengel, a 1983 CHC alum, has been with the program for 10 years, three as head coach. According to Bengel, the team’s motto was to “take care of the little things first and the big things will take care of themselves.” And that it did, as the JV squad went 26-0 behind the top-notch performances of five returning players, sophomore captains Eric Adamski and Dan Gentry along with Mike Trionfo, Blake Geiger and Sean Lamarre. Calvert Hall’s junior varsity team has also taken the MIAA title for three consecutive seasons.

“This year’s team was an exceptional group of guys,” said Sparks who also commented on the team’s constant hustle and exemplary sportsmanship.

Success breeds success and youngsters have their eyes on The Hall. “Kids are excited about coming to Calvert Hall and playing baseball,” Eckerl said. “It’s just fun.”