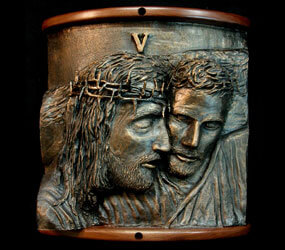 WINTER PARK, Fla. – Far more than a visual freeze frame of a moment in time, the Stations of the Cross sculpted by Deacon Al Castellana for Sts. Peter and Paul Parish in Winter Park compress the intensity of emotion as well.

“We certainly looked at it in a prayerful way,” said Father Derk Schudde, pastor, “taking a close-up view of the stations – the best close-up shot. They’re often seen from a distance, but we looked at it at the heart of that moment.”

Station IV, Jesus Meets His Mother, was the test sample, the first station that Deacon Castellana committed to clay. It determined the fate of the project.

“I spent a great deal of time,” he explained. “Mary’s touching (Jesus’) beard – that really gentle touch and the same thing of him holding her face – their eyes are really gazing at each other and at one place, there’s a little smirk as if Jesus is saying, ‘Look Mom, I’m doing it.’ When it was finished, Father Derk was stunned and there was a little misty stuff in his eyes.”

The project began in April 2008 when Father Schudde indicated he wanted Stations of the Cross for the parish and Deacon Castellana thought, “I wonder what that would take.” He spent a full year researching stations around the globe and ultimately settled on 15-inch-by-19-inch rectangular high-relief sculptures to arc the church columns.

“Station XI, Jesus is Nailed to the Cross, was the most difficult,” the deacon said. “Jesus’ arm is my arm, my own hand clutching up in pain. I had to cast it six times until it came out perfect.”

Priest and artist worked together every step along the multiple drawings and castings. Once the size and drawing were selected, there was the Plastilina modeling clay, the latex mold supported with another plaster mold and the casting in Hydrocal – a mixture of marble dust, cement and plaster. The cast was painted metallic black with a faux bronze finish added. Then there was the wooden frame to attach and finally four coats of polyurethane so people could touch the sculptures.

“Al had so many obstacles to get it right,” Father Schudde said, “but it was a labor of love – 24/7. That kind of commitment day after day and he was learning at the same time. Not having done something like this before, but having the inspiration of ‘I want to do this’ and then actually getting it done.”

Deacon Castellana credits his teacher with helping him to ensure that “Jesus was the same in every station.”

“Al was an accomplished wood and stone carver when he came for his first class 28 years ago,” said David Cumbie, master sculptor at Crealde School of Art in Winter Park.

“I got him into sculpting clay and casting, but this was a new process for him. He handled the whole project very well and really impressed me. He’s my star student.”

Station XIII, Jesus is Taken Down from the Cross, brought its own trials. Deacon Castellana envisioned Mary leaning over to kiss her son.

“When I was doing the face of Mary, I sculpted in my hand so I could get all the detail I wanted,” he said. “I kept saying a prayer and all of a sudden I moved a piece of clay the size of half a grain of rice and it became Mary. A voice said, ‘Stop.’ I needed help and I got it.”

The installation of the stations was another magnum opus, begun at 10 p.m. Nov. 10, 2010, Deacon Castellana’s 80th birthday. With the assistance of his two sons who flew in specifically for the endeavor and a 10-page operating plan, the 14 stations that had taken the artist two and a half years to create were fully installed in a little over three hours.

“The stations are perfect for our church,” Father Schudde said. “It’s not really artwork – it’s prayer, prayer molded into clay. People really see something behind it – you see the love and prayer behind it – an extension of Al’s personality and his love for the Lord. He captured it so beautifully.”

Deacon Castellana has been married to his wife, Kay, for 58 years. They have five children, 11 grandchildren and two great-grandchildren. He retired after 31 years as a U.S. Marine colonel and in May will celebrate 26 years as a deacon.

“I always prayed,” he said, “for eight or nine years, Lord, you must help me do something for the church. He said, ‘OK, I’ll teach you.’ And he gave me this massive project. I could not not work on it. There’s a little bit of me in each one.”