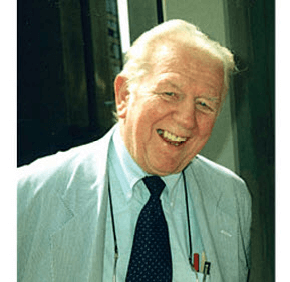 Editor’s note: Joe Kelly, whose passions included St. Ignatius Parish in Baltimore, died at age 94 Nov. 26. A funeral Mass for Kelly will be held Nov. 30, at 11 a.m., at the parish. This profile of Kelly was originally published Oct. 6, 2011 and written by Christopher Gaul, who died in October 2012.

Joe Kelly remembers when in the 1930s and into the 1940s, Baltimore City police officers had to direct traffic and pedestrians around St. Ignatius Church on Calvert Street during the time of the Novena of Grace.

He remembers when even the old street cars displayed “Novena of Grace” signs for the convenience of the hundreds of riders who wanted to attend the March 4 through March 12 prayer services at the historic Jesuit church.

“It was really something; it was amazing,” said the 93-year-old parishioner and longtime journalist.

The traditional Jesuit novena to St. Francis Xavier was discontinued at the parish sometime after World War II but was renewed a few years ago by St. Ignatius’ longtime pastor, Jesuit Father William Watters, “thanks in large part to Joe,” he said. “And while not quite the huge event it once was, it is growing in popularity within a parish that has been experiencing a joyous revival of late.

“Joe has been very instrumental in keeping the novena alive,” Father Watters said, noting that Kelly continues to be one of the parish’s most active members, using his journalistic and public relations skills to promote its services and events.

“He’s a great friend and a great person,” Father Watters said, adding that Kelly is “probably the oldest active parishioner we have, and a wonderful one.”

Kelly has many fond memories of St. Ignatius. He attended the old Loyola High School on Calvert Street where he first became attracted to the now- 155-year-old church.

“There was just something about it,” Kelly recalled. “It was such a friendly, human and warm place which had a lot to do with the Jesuit priests who lived there. They were very approachable.”

Kelly continues to attend Mass at St. Ignatius every Sunday along with his son, Jacques Kelly, the well-known columnist for The Sun, who lives nearby in Charles Village.

“I drive him there because he doesn’t drive,” the elder Kelly said with a grin.

“Joe is a man of very deep faith,” Father Watters said. “He’s a very gentle man, wonderfully human and humble. He even goes to confession every single week.”

No wonder then that Kelly also remembers the time when there were more than 10 confessionals active at St. Ignatius, from 6 a.m. to 8:30 p.m. prior to the Novena of Grace.

Times have changed, Kelly acknowledged, but he is encouraged for the future of the church and especially that of St. Ignatius.

“It’s a very vibrant place these days,” Kelly said. “There’s much more enthusiasm. There are a lot of young adults and kids running around, which is a very good thing. It was pretty shaky in the 1970s and we were down to about 180 people at Mass on Sundays, but now we’re around 600 to 700, and we’re getting a lot of people from beyond the Beltway.”

Hired by the Sun when he was 25, Kelly later moved to the now-defunct Washington Star where he covered horse racing. He said he was devastated when the paper folded in 1981 but soon found work doing publicity and public relations for the Laurel Park racetrack and then the Maryland Horse Breeders Association. Later he became active in helping promote the annual Jim McKay Maryland Million Day, which Oct. 1 marked the 26th running of an event that has become one of the nation’s best-known single days of horse racing excitement. McKay, the late renowned sportscaster and active Catholic who lived in Maryland, was a good friend whom Kelly said he “really, really misses.”

Kelly’s wife, Stewart (“Stu”), with whom he had six children, died 18 years ago, but he continues to live in their Guilford Avenue home, which the couple bought in 1949.

One of his favorite St. Ignatius assignments is acting as the “publicity man” for the parish’s celebrated New Year’s Eve interfaith and ecumenical service, attended by Jewish, Muslim and Protestant clergy who offer brief talks about faith and prayer.

“We pack the church,” he said. “The idea of it started when we thought that Baltimore should pray for itself and offer thanksgiving for the previous year. Now it’s become as traditional as the fireworks downtown and is covered by TV.”

Joe Kelly has no thoughts about taking it easy, as it were.

“There’s this stereotype that at age 65 everything shuts down,” he said. “As for me, I was just getting started then and I haven’t stopped since.”