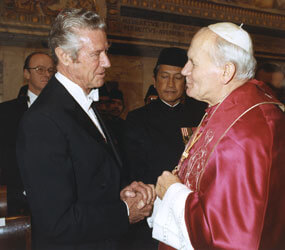 CARMEL, Calif. – The first U.S. ambassador to the Vatican, William A. Wilson, died Dec. 5 at his home in Carmel. He was 95 and had been ill with cancer, his family reported.

Wilson was a longtime friend and political adviser to President Ronald Reagan when he was named the president’s personal envoy to the Vatican in 1981. Three years later, when Congress repealed an 1867 law prohibiting full diplomatic relations with the Holy See, Wilson’s position was elevated to that of ambassador.

He served in the post until May 1986, when he resigned to return to private life.

Details on funeral arrangements for Wilson had not yet been announced.

Wilson was a Los Angeles native who stepped into his father’s oil tool business in 1938, eventually managing it until it was sold in 1955.

His business interests subsequently involved Southern California real estate investment, cattle ranching in the United States and Mexico and roles on the corporate boards of companies including Pennzoil. That role led to questions about a trip Wilson made to Libya in 1986, meeting with officials of Moammar Gadhafi’s government at a time when such contacts were forbidden by U.S. policy. Wilson stepped down from the ambassadorial post soon after that trip was made public.

He and his wife, Elizabeth, met then-actor Ronald Reagan and his wife, Nancy, in about 1960 at the home of mutual friends and became friends themselves. Through Reagan’s election as California governor in 1967 and his campaign for and election to the presidency, the Wilsons were known as part of the politician’s “kitchen cabinet” of informal close advisers.

In a 1999 interview with the quarterly newsletter of Thomas Aquinas College, where Wilson, who became a Catholic as an adult, was a board member, he said his time representing the U.S. government at the Vatican had enhanced his spiritual life.

“We had so many occasions to attend Mass” with Pope John Paul II, he told the quarterly. “It is always an amazing and emotional experience to be in his presence. Having the chance to count so many wonderful clerics – from the highest to the lowest ranks – as personal friends also enhanced my appreciation for the church and our faith.”

Wilson also was a member of the Knights of Malta. He is survived by two daughters and numerous grandchildren and great-grandchildren.

Wilson told reporters upon his departure as ambassador that the transition to formal diplomatic ties with the Vatican helped the various levels of the U.S. government to understand “the unique importance of this mission and the importance that it holds to the foreign policy of the United States.”

Opening formal diplomatic relations with the Vatican had its critics such as Americans United for the Separation of Church and State that argued – and continue to argue periodically – that formal ties with the Vatican constituted a government preference for one religion over others.

In 1986, Americans United took the legal challenge all the way to the U.S. Supreme Court, which declined to hear the case.

Lower courts had said the question of establishing diplomatic ties is an issue the Constitution leaves exclusively to the executive branch and therefore should not be questioned by the judiciary.

As Reagan’s personal envoy, Wilson was criticized for trying to intervene on behalf of Archbishop Paul Marcinkus, an American who headed the Vatican bank when it was being investigated by Italian authorities.

Under the late archbishop’s watch the bank was involved – unwittingly, he and the Vatican always maintained – in a major 1980s Italian banking scandal.