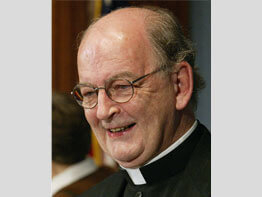 WASHINGTON – Father Richard John Neuhaus, a former Lutheran minister who became a Catholic priest and a staunch defender of church teaching on abortion and other life issues, died Jan. 8. He was 72.

His funeral Mass was scheduled for 10 a.m. Jan. 13 at the Church of the Immaculate Conception in New York. A wake service was to take place at 7:30 p.m. Jan. 12 at the church.

The founder and editor in chief of the journal First Things, Father Neuhaus was hospitalized in New York after becoming ill Dec. 26 with a systemic infection, according to a message sent to e-mail contacts and posted on the magazine’s Web site. He had been diagnosed with cancer in late November.

Father Neuhaus, a native of Pembroke, Ontario, often was invited to lecture and participate in panel discussions on religion in the contemporary world. His views on abortion, stem-cell research, cloning and social issues contributed greatly to Catholic and other religious discourse on politics and society.

He also regularly consulted with President George W. Bush on bioethical issues. In 2005 Time magazine named the priest one of the 25 most influential evangelicals in America. The magazine described him as having “a fair amount of under-the-radar influence” within the Bush administration.

A prolific author, Father Neuhaus wrote numerous books commenting on contemporary issues and the role of the church in society. In First Things he regularly published long analyses on contemporary topics as diverse as theological disputes between Catholics and Protestants, abortion policies and the application of just-war principles in foreign policy.

Father Neuhaus founded First Things, a journal published by the Institute on Religion and Public Life, in 1990. The magazine was established as an ecumenical journal “whose purpose is to advance a religiously informed public philosophy for the ordering of society,” according to its mission statement.

The son of a Lutheran pastor and one of eight children, Father Neuhaus was born March 14, 1936. He became a Lutheran minister about 1960 after graduating from Concordia Theological Seminary in St. Louis.

He settled in Brooklyn, N.Y., serving a poor congregation that encompassed the black community in the borough’s Bedford-Stuyvesant neighborhood. From the pulpit he regularly addressed civil rights and social justice concerns and spoke against the Vietnam War. In the late 1960s he gained national prominence as a co-founder of Clergy and Laymen Concerned About Vietnam with Jesuit Father Daniel Berrigan and Rabbi Abraham Joshua Heschel.

His perspective changed by the early 1970s and the 1973 U.S. Supreme Court decision on Roe v. Wade galvanized him as a member of the growing neoconservative movement. Throughout the 1970s and 1980s he became an outspoken advocate of “democratic capitalism” and began arguing that Judeo-Christian values again should have a place in the public square. He also was an early advocate of faith-based policy initiatives by the federal government.

In 1984 he established the Center on Religion and Society at the Rockford Institute to promulgate his views. After being removed from the institute over philosophical differences five years later, he then founded the Institute on Religion and Public Life.

On Sept. 8, 1990, then-Rev. Neuhaus became a Catholic and a year later he was ordained by Cardinal John J. O’Connor as a priest of the Archdiocese of New York.

In recent years, he began to compare the pro-life struggle to the 1960s’ civil rights movement. During the 2004 presidential campaign, Father Neuhaus was a leading advocate for denying Communion to Catholic politicians who supported abortion and voted against church teaching on life issues. At the time he said it was a mistake to isolate abortion “from other issues of the election and from other issues of the sacredness of life.”

Father Neuhaus underwent successful surgery in January 1993 to remove a malignant tumor in his colon.