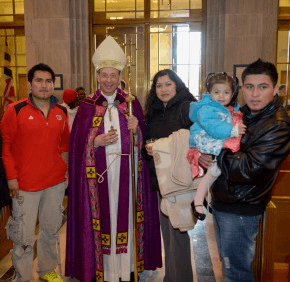 By Christopher Gunty
and Erik Zygmont
Catholic Review Staff
Archbishop William E. Lori of Baltimore called Pope Francis’ apostolic exhortation “Amoris Laetitia” (“The Joy of Love”), released April 8, an “expression of the church’s wisdom with regard to marriage and family life.”
The archbishop and other local Catholics involved in marriage and family ministry praised the pope for issuing a document that reaffirmed church teaching while emphasizing the pastoral elements of “accompanying” families that don’t always meet the church’s ideal.
In the document, the pope said, “As this exhortation has often noted, no family drops down from heaven perfectly formed; families need to constantly grow and mature in the ability to love.”
The pope “identifies a lot of problems that I think most families, when they read it, will say the pope understands, the pope is listening, the pope is appreciating the problems they are going through,” Archbishop Lori said.
“He also recognizes many, many good-hearted, loving couples really trying hard to make a go of their marriages and their families but who are facing pretty stiff headwind. It’s truly the work of a pastor of souls, this exhortation.”
The archbishop said the document is a beautiful, compassionate, realistic celebration of love that contains much that is helpful to families.
He especially liked the pope’s beautiful recap and reflection on scriptural references to love.
“The Holy Father proposes marriage in all its truth and beauty,” the archbishop said, “but he knows to whom he is proposing it: people who do not live in some ideal world but people who live in a very real world marked with triumphs and tragedies and daily routines.”
He urged people to take the pope’s advice and read the exhortation carefully and patiently, with special attention, as the pope recommends, to certain sections for certain people. For example, the pope noted that chapters four and five would be especially helpful for couples – married and preparing for marriage. Chapter six is highlighted for those working in the church’s pastoral ministry. The pope also noted that “everyone should feel challenged by chapter eight,” which focuses on “Accompanying, Discerning and Integrating Weakness.”
For Edward Herrera, archdiocesan director of Marriage and Family Life, the pope’s reflection on St. Paul’s letter to the Corinthians is eloquent.
“For engaged couples, they should just go and read that and say, ‘How are we going to live this out in our marriage?’ Then for married couples, the same thing. ‘How are we trying to live this out? How are we falling short of this?’ It’s a beautiful reflection on what love is and that’s one very important place for couples, both married and engaged to start,” Herrera said.
Herrera said chapter six provides church workers such as himself concrete steps to help couples prepare for and enrich their marriages. The whole exhortation “gives a little something for everyone, no matter where you are in the church. Whether you work for the church, or you’re a pastor or a volunteer, or whether you’re a married or engaged couple.”
He said it will take time to see whether the archdiocese needs to develop or change any of the programs it offers in this area of ministry. Immediately, it calls all those involved in marriage and family ministry at the parish and archdiocesan level to ask whether they are responding in love to people’s needs.
Archbishop Lori said he thinks that much is already being done well in the archdiocese – in the parishes and in the tribunal that helps people deal with failed marriages.
“The tribunal practice is critically important, but it should also be a means or an impetus to greater healing in a general strengthening of family life,” the archbishop said. “I know that orientation is very much in the minds and hearts of the people who carry forward the work of the tribunal now.”
He also praised priests, deacons and ecclesial lay ministers who work with families, inviting people to “come as they are” to our parishes.
“Now when you come as you are, you meet people who are striving to live the Gospel. You hear the truths of the Gospel and you’re exposed to God’s grace that we hope and pray brings about in all of our lives a transformation.”
As much as our parishes strive to be places of welcome, “Of course, we can always do it better,” he acknowledged, himself included.
The exhortation draws on Scripture, church teaching, the work of two meetings of bishops from around the world on the family, and the writings of Pope Francis and his predecessors.

In ‘The Joy of Love,’ pope urges sharing truth of family with mercy, helping those struggling

Archbishop Lori: The 2015 synod and the mission of the family