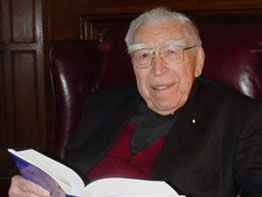 WASHINGTON – A funeral Mass for the founding president of the National Catholic Bioethics Center was celebrated May 5 at Holy Rosary Church in Houston.

“Father Albert can rightly be regarded as one of the pioneers of the discipline of bioethics,” said Peter J. Cataldo, former director of research at the center. “At a time when society and academe was beginning to evaluate the new technologies of biomedicine, Father Albert was at the forefront of applying faith and moral reason to these new questions. A true scholar and person of virtue, Father Albert should be emulated by all those who call themselves bioethicists.”

Having lived as a priest-in-residence at Holy Rosary for the last several years of his life, he was being treated for pneumonia at St. Joseph Medical Center in Houston at the time of his death, said Mary Gaffney, parish secretary.

Born Sept. 1, 1920, in Chicago and ordained to the priesthood in 1954, Father Moraczewski earned his doctorate in pharmacology from the University of Chicago in 1958 and many honorary degrees throughout his life, including a master of sacred theology bestowed on him by Pope John Paul II in 1989.

A World War II veteran, he held various research and teaching positions in psychopharmacology, theology and ethics at the University of Chicago, the Houston State Psychiatric Institute and Baylor College of Medicine in Houston.

In 1972 – to help medical professionals deal with the complex moral and ethical questions cropping up from the continuing advances in medical science, genetics and molecular biology – Father Moraczewski founded the Pope John XXIII Medical-Moral Research Center, which is now the National Catholic Bioethics Center in Philadelphia.

Addressing issues such as embryonic transplants, in vitro fertilization, euthanasia, the prenatal diagnosis of genetic conditions and stem cell research, the center continues to explore and speak out on ethical issues relating to medical intervention.

“Even though Father Albert was a theologian and a scientist, he always showed pastoral solicitude and concern for his colleagues,” said John M. Haas, current president of the center. “Father Albert’s fidelity to the teaching authority of the Catholic Church did not mean that he was not a creative, innovative thinker always willing to approach problems from a different perspective or push the received tradition to the limits of its possibilities in finding solutions to the tough moral questions.”

Father Moraczewski remained as president emeritus and staff ethicist of the center until his death.

In 2004 the Catholic Health Association presented him with a lifetime achievement award, recognizing him for his contributions to the Catholic health ministry through scholarship, guidance and faith. In 2002 the Catholic Press Association awarded a book Father Moraczewski co-wrote with Cataldo a first-place prize for professional book and an honor for best book by a small publisher.

In early April Father Moraczewski was given his final formal public recognition at the Center for Bioethics and Culture in San Francisco, when Haas accepted on his behalf the Paul Ramsey Award for his contributions to the world of bioethics, Gaffney said.

He is survived by several nieces and nephews, several grandnieces and grandnephews and a great-grandnephew.