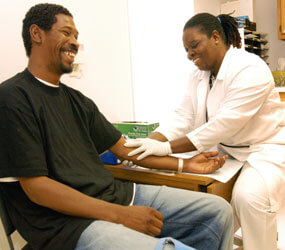 WASHINGTON – Seeing President Barack Obama’s first federal budget proposal in his still young administration, Catholic Charities officials and others committed to meeting the needs of the poor are breathing a bit easier.

For the first time in years they are seeing a spending plan that boosts spending for health care wellness and prevention efforts, education, affordable housing, food stamps and Medicaid for cash-strapped states.

It’s a budget, advocates and providers agree, that reflects a change in priorities. It’s a welcome change, one which advocates feel moves closer to the biblical call for justice.

“We’re pleased to be able to make a statement about this budget where we’re not having to respond to cuts to the very programs that we know provide the substantial safety net for the families and individuals that we serve,” Candy Hill, senior vice president for public policy and government affairs at Catholic Charities USA, said during a March 2 conference call with reporters to discuss a “values audit” of Obama’s $3.6 trillion fiscal year 2010 budget.

“Overall, we would rate this budget proposal as very positive for the people we are concerned about,” she said.

Ms. Hill’s comments reflect a growing sentiment across a widening circle of advocates – especially those outside of faith-based communities – that government budgets are moral documents that reflect the policy priorities of the nation.

As introduced, the fiscal year 2010 budget proposed by the White House places more emphasis on aiding those most in need while shifting a portion of the tax burden from the poor and middle class to the country’s wealthiest earners.

The 2010 budget resolution is separate from the $410 billion omnibus appropriations bill signed by President Obama March 12. That bill funds most government agencies through the end of the 2009 fiscal year in September.

As the budget debate unfolds in the coming weeks, the Obama White House has pledged to fight for what it believes best serves the country. Advocates are sharpening their talking points by stressing the importance of supporting the poor and vulnerable, especially in a time of severe economic recession, while de-emphasizing tax cuts for the wealthy.

“This budget debate, we believe, should be seen in a values context,” the Rev. Jim Wallis, executive director and CEO of Sojourners, a progressive evangelical organization that addresses justice issues, told the teleconference. “A budget tells us what’s most important and what’s most valued …. So it’s appropriate for the religious community to do what’s called a values audit of a budget or a moral audit of our priorities.

“The common good has not been a part of our decision-making for a long time now,” he explained. “This budget, I think, is a dramatic step in trying to restore some sense of the common good.”

The shift in priorities is “exciting,” said Sister Simone Campbell, a Sister of Social Service who is executive director of Network, the Catholic social justice lobby which has fought budget cuts in social services throughout much of its 38-year history.

“It is the Obama administration putting down all that they believe in in a focused, concerted effort, not just giving lip service to their policy priorities, but to make it real,” she said. “Yeah, there’s a big price tag and that makes me nervous. But for once there is a realistic assessment, not halfway measures, and a promise for implementation. It’s stunning.”

Generally, said Kathy Saile, director of the Office of Domestic Social Development at the U.S. Conference of Catholic Bishops, President Obama’s budget resolution offers much to be supported given the bishops’ oft-repeated stance that the federal blueprint for spending should never leave behind the poor and vulnerable.

“The bishops, when they weigh in on the budget, they always look at it as a moral document,” Ms. Saile said.

“There was a blind-faith belief in trickledown economics,” Hanson said. It’s yet to be worked out how much of the burden will be shifted and how it will be presented, but during the campaign Obama’s rhetoric indicated he wanted to shift the burden back (to the wealthy).”

Catholic Charities’ Ms. Hill said the new emphasis on human needs in the budget gives Catholics the opportunity to dust off copies of the U.S. bishops’ 1986 pastoral letter, “Economic Justice for All,” and review what the church teaches about the role the economy plays in a society.

“I think we would find in that pastoral, which is decades old now, that the principles the bishops of the United States laid out for guidance to all of us on economic justice really need to be paid attention to more than ever now. With the recommendations that are there, we could look at this budget and make some evaluations of the direction of the new administration,” Hill said.

The budget, of course, isn’t all peaches and cream. Ms. Saile said the bishops are concerned that while President Obama has talked about the need to boost support for public education, he has proposed eliminating the federally-funded voucher program for children in the District of Columbia school system. The program, which she described as a justice issue, has allowed parents to choose which schools to send their children and has had good success in achieving improved outcomes for students by nearly all accounts.

Ms. Hill and her social service colleagues are concerned about the proposal to limit the tax benefit on charitable deductions for affluent households. The concern at some charitable agencies is that the proposal could lead to a decline in donations at a time of growing need. Catholic Charities USA has not taken a stance on the proposal.

An analysis released by the Urban Institute-Brookings Tax Policy Center indicates the proposal would apply only to the top 1.2 percent of donors, those in the top two tax brackets. The review projects that overall contributions would decline by about 2 percent starting in January 2011 when the proposed new tax rates would take effect.

President Obama calls for funneling the dollars saved by reducing the deduction to provide health care for uninsured Americans.

Paul N. Van de Water, a senior fellow at the Center on Budget and Policy Priorities, said in his own report on the effects of limiting the deduction for charitable giving that, with more people having access to paid health care, there would be a corresponding drop in the need for charitable agencies to provide uncompensated health care, thus offsetting the loss in donations.