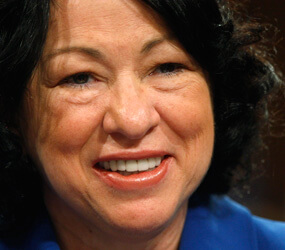 WASHINGTON – Judge Sonia Sotomayor will become the first Hispanic on the Supreme Court, after the Senate confirmed her appointment Aug. 6 by a 68-31 vote.

Sotomayor, 55, will be the sixth Catholic on the nine-member court, the most ever at one time. She was scheduled to be sworn in Aug. 8.

A New York native and daughter of Puerto Ricans who struggled to be sure their two children were well-educated, Sotomayor is President Barack Obama’s first Supreme Court nominee. She will take the place of Justice David Souter, who retired at the end of the term in June.

Shortly after the vote, Obama said he was “filled with pride and great confidence” in Sotomayor and that her confirmation made not only a great day for the judge and her family, but “a great day for America.”

He said the addition to the court of a justice with Sotomayor’s temperament, intellect and history will help assure that the saying “equal justice under the law” is “not just a phrase over the door of the courtroom, but what happens inside” the court as well.

During several days of formal debate on her nomination, a chorus of Senate Democrats and a handful of Republicans recited her inspiring story of being raised in a housing project in the Bronx borough of New York and going on to win scholarships and honors at a rigorous Catholic high school and Ivy League universities.

Among them, Sen. Bob Menendez, D-N.J., said that as the child of Latino immigrants himself, born the same year as Sotomayor and raised in a New Jersey tenement, he particularly relished the opportunity to confirm someone with a similar background. He said the makeup of the court, which will have two women, one a Hispanic, and an African American among its members, is a testament to how far the United States has come in achieving the goal of the country’s founders, of equal opportunity for all.

Senators who voted against Sotomayor’s confirmation – all Republicans – took to the floor to complain that they thought she was a “judicial activist,” based largely upon comments she has made in speeches, rather than upon anything they could point to in her legal writings.

Sotomayor has been a judge on the 2nd U.S. Circuit Court of Appeals since 1998, nominated to that post by President Bill Clinton. Before that she spent six years as a U.S. District Court judge in New York, nominated to that position by President George H.W. Bush in 1991. She also served as an assistant New York County district attorney and worked in private practice.

After her nomination was announced May 26, Sotomayor made the rounds of Senate offices, paying courtesy get-to-know-you calls before her confirmation hearings in July. Those hearings brought detailed and often repetitive questions from the Senate Judiciary Committee about court cases both well-known and arcane.

Questions aimed at how Sotomayor would rule on particular types of cases, including abortion, proved as unsuccessful in eliciting a specific answer as they have at previous Supreme Court nominees’ confirmation hearings. In contrast to the two most recent appointees to the court, Sotomayor received no questions from senators about how her Catholic faith might influence her judicial decision-making.

The other Catholics on the court are: Chief Justice John Roberts and Justices Antonin Scalia, Anthony Kennedy, Clarence Thomas and Samuel Alito.