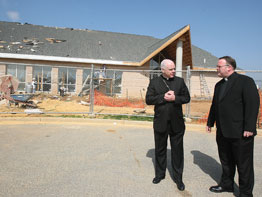 WALKERSVILLE – Only a few months before St. Timothy, Walkersville, parishioners expected to occupy their new parish center, an April 9 fire may have delayed their plans.

The building, which was still under construction, suffered damage when firefighters had to cut a 100-square-foot hole in the roof to put out a smoldering fire.

The fire was reported around 3 p.m. when the foreman of the construction project noticed smoke inside the building, according to Father Andrew Aaron, pastor. The foreman telephoned emergency services and more than 80 fire fighters from Frederick and Carroll counties arrived within 10 minutes to fight the two-alarm blaze, Father Aaron said.

The fire started about 30 minutes after welders were working on the roof, the pastor said. No negligence is believed to have been involved, Father Aaron said.

“We were extremely lucky they caught it so soon and were able to contain it,” said Father Aaron. “I was relieved that no one was hurt and the damage was limited.”

There has been no estimate on the cost of the damage, and investigators still have to evaluate the building for water and smoke damage, he said.

“We’re going to get the place opened as soon as we can,” said Father Aaron. “We had hoped to open it in July and dedicate it in September. Who knows, maybe we can still stick to our original dates.”

The parish center is a $2.8 million project that will feature a hall with a basketball/volleyball court, meeting rooms and office space. The 12,000-square-foot building features a large inverted V as part of its exterior design, echoing the nearby church.

“For a relatively small parish, they’ve been very generous in supporting the project,” said Father Aaron, noting that there are 980 registered parishioners.

Archbishop Edwin F. O’Brien visited the parish a day after the fire and said he, too, was glad the fire was not more serious. He believes parishioners will stay strong despite the setback.

“To launch out on a building project like this must mean the parishioners have pretty strong feelings about the church,” he said. “Their faith is strong. I think that will continue.”