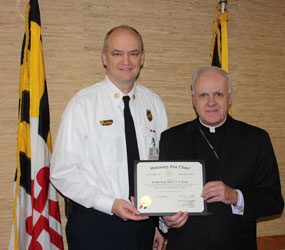 “We are very fortunate to have the enthusiasm, dedication and spiritual support of our chaplains,” said Chief Clack, who made the announcement during a March 12 meeting with the Board of Fire Commissioners at the fire department’s downtown headquarters.

Archbishop O’Brien has been a staunch supporter of firefighters and emergency service providers and was elated to receive the honor.

The department’s chaplaincy program began in the early 1950s and provides guidance and spiritual counsel to its members.

Chaplains officiate at memorial services and funerals, and present the invocation and benediction at other functions. Chaplains occasionally visit members at fire stations, function as liaisons for the department’s Critical Incident Stress Debriefing Team and respond to all firefighter fatalities. They are available to assist with family notifications when requested by executive staff and to pray with members.

Additional tasks performed by chaplains involve visiting members in the hospital and making themselves available to support the fire chief and other members of the executive staff.

A convert to the Catholic faith and a permanent deacon ordained for the Diocese of St. Cloud, Minn., Chief Clack has been incardinated into the Archdiocese of Baltimore and has been assigned to Sacred Heart of Jesus in Highlandtown.