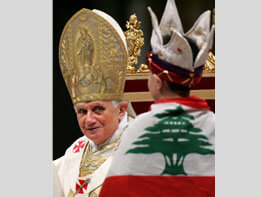 VATICAN CITY – The current financial crisis should be seen as a challenge to find new economic models that promote honesty, development and concern for the environment, Pope Benedict XVI said.

“We need to try to establish a ‘virtuous circle’” of living simply and fighting poverty, the pope said Jan. 1 as he celebrated Mass for the feast of Mary Mother of God and World Peace Day.

During the Mass in St. Peter’s Basilica and reciting the Angelus afterward with people gathered in St. Peter’s Square, Pope Benedict focused on the 2009 World Peace Day theme, “Fighting Poverty to Build Peace.”

But he also called for an end to the “massive violence” in the Gaza Strip and offered special prayers for “the small, but fervent parish in Gaza.”

“We place at the feet of Mary our concerns for the present and our fears for the future, but also our well-founded hope that with the wise and farsighted contributions of everyone it will not be impossible to listen to one another, meet together and give a concrete response to the widespread aspiration to live in peace, security and dignity,” the pope said.

Pope Benedict prayed for peace throughout the Middle East, accepted the offertory gifts from a group of children from Lebanon and listened as a prayer was read in Arabic asking God to inspire people to combat poverty as a contribution to peacemaking.

In his homily, the pope said he imagines Mary often asked herself: “Why did Jesus want to be born of a simple and humble young woman like me? And why did he want to come into the world in a stall and have those Bethlehem shepherds as his first visitors?”

After Jesus’ death, he said, Mary understood that “God became poor for us, to enrich us with his poverty full of love, to exhort us to stop the insatiable greed that gives rise to fighting and division, to invite us to moderate our mania to possess and, in that way, to make us open to sharing and welcoming one another.”

Poverty chosen as a way of life to demonstrate the primacy of God and of love for others is not the same thing as the kind of poverty experienced by millions of the world’s people, he said.

“There is a kind of poverty, an indigence, that God does not want and that must be fought,” he said, adding that it is “a poverty that impedes people and families from living according to their dignity, a poverty that offends justice and equality and, as such, threatens peaceful coexistence.”

While AIDS and other diseases spread, while children live without basic necessities and millions of families struggle to find food, the pope said, “the unacceptable arms race” continues.

“On one hand, there are celebrations for the Universal Declaration of Human Rights, while on the other hand there is an increase in military spending in violation of the United Nations’ charter, which commits nations to reduce them to a minimum,” he said.

Solidarity, not a weapons system, is the key to protecting human dignity and ensuring peace, the pope said.

Turning to the current global economic crisis, the pope asked: “Are we ready to read it, in all its complexity, as a challenge for the future and not just as an emergency needing short-term responses? Are we ready to conduct together a profound revision of the dominant model of development in order to correct it in a concerted and farsighted way?

“Even more than the immediate financial difficulties, the ecological state of the planet and, especially, the cultural and moral crisis whose symptoms have long been evident in many parts of the world require it,” he said.

The solution, Pope Benedict said, must be based on adopting a moderate lifestyle and making a commitment to living in solidarity with those whose dignity is threatened by poverty and by war.

Addressing pilgrims in St. Peter’s Square after the Mass and greeting hundreds of people who had participated in a march for peace sponsored by the Rome-based Sant’Egidio Community, the pope said Christians are called to live with hope for the future.

“It is not a matter of trusting in better luck or in modern maneuvers of the market and of finance, but of each one of us making a commitment to being just a bit better and more responsible and to counting on the goodness of the Lord,” he said.