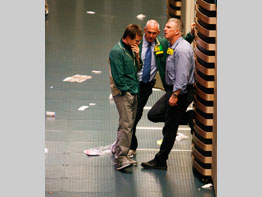 WASHINGTON – To those entrusted with husbanding the financial portfolios of Catholic foundations and institutions, the Sept. 29 rejection by the U.S. House of a $700 billion package to shore up the nation’s financial systems posed new concerns about the economy and those charged with overseeing it.

“The government is saying, ‘Trust us,’” said Frank Rauscher, the senior principal at Aquinas Associates in Dallas, but “there’s no fundamental basis as to why anybody should.”

He noted that the Securities and Exchange Commission had given five investment banks the authority to leverage funds at a rate about three times the standard ratio – “way beyond what anybody else had,” he said.

Those five banks were Lehman Bros., Bear Stearns, Morgan Stanley, Merrill Lynch and Goldman Sachs. The five have been at the epicenter of the financial crisis that has gripped Wall Street since Bear Stearns failed and was quickly sold in March.

“Those five were heavily involved in the whole mortgage problem,” Rauscher told Catholic News Service in a Sept. 30 telephone interview from Dallas. The House’s rejection of the bailout package was tied by some to the lack of recourse in the measure for homeowners who bought their properties with subprime loans and are now facing foreclosure.

Rauscher pointed to the case of an Iraq War veteran whose mortgage-default crisis was publicized in The New York Times.

Sgt. Sandra Rolon bought a house in the Bronx borough of New York City for $460,000. Her Army pay was $2,800 a month, but her lender set the monthly mortgage payment at $4,000 a month, saying she could always refinance the loan.

Rolon, according to Rauscher, used her combat-duty pay to make up the difference for a time, and hoped to redo her basement to rent out rooms, but her home improvement and house-sharing efforts fell through. And, “of course, she’s lost everything. The person who put her in that (position) should be in jail,” he said.

Rauscher said, “If you’re an average guy on the street, why would you trust Wall Street? These are the guys who brought Enron to us. Sometimes it’s a zero-sum game in everything they do. For all the good that they do, there’s got to be somebody who loses some place.”

Since Congress announced its intent to revise the plan, Rauscher suggested “reversing some of the deregulation and put more of the regulation in. They need to be regulating the mortgage brokers who never before were regulated. They need to regulate the hedge-fund managers.”

And given the spate of bank sales in recent weeks and the fact the sold banks’ executives were trumpeting their stability mere weeks before the sales, Rauscher, who once ran a bank, said: “I’d be scared to death, not knowing who I should be dealing with. How do I know that they know what their (own) situation is?” – referring to bank executives who aren’t necessarily being told by their bosses what a bank’s real situation is.

The No. 1 criterion for resolving the financial crisis “still has to be the people who are most at the periphery of the financial system and failing the most,” said Oblate Father Seamus Finn, a member of the board of the New York-based Interfaith Center for Corporate Responsibility. “I’m surprised the foreclosure piece didn’t get into” the legislation, he added.

Efforts had been made to bring some kind of relief to those threatened with foreclosure but did not survive in the version of the package rejected by the House, 228-205.

Father Finn said an increase in the maximum savings account that would be guaranteed by the Federal Deposit Insurance Corp. from $100,000 to $250,000 “makes good sense to me, and I think maybe a trade-off on that side is going to be that the government should be more immediately involved in the foreclosure issue.”

“I think that’s where people on the streets and the towns and the cities around the country are going to be impacted,” he said.

Even if a bailout passes and even if its ultimate payout doesn’t reach $700 billion, the next president’s agenda will be affected, Father Finn said.

“It’s certainly not going to make his first 100 days or 12 months very easy,” he added. “There will have to be some recalculation of their ambitious plans” in the fields of health care and foreign aid.

“We’ve all acknowledged a failure of leadership this week. It will have tragic consequences unless it’s reversed,” said Frank Butler, president of the Washington-based Foundations and Donors Interested in Catholic Activities, or FADICA, in a Sept. 30 telephone interview with CNS.

“Greed and excess has gotten us where we are, but what do we do about it now that we’re there?” he asked. “It seems to me you’ve got to take some form of action to restore confidence in investors and in the markets. We’re also members of the human community. We’ve got to be socially and politically responsible.”

Rauscher dismissed the notion of a widespread credit crisis.

He referred to the book “The Smartest Guys in the Room,” which detailed the rise and fall of Enron. “It still applies,” Rauscher said. “These guys all think they’re the smartest guys in the room. They’re missing some common sense. It happens in a lot of professions.”

Given the size and importance of the U.S. economy, one might think other nations’ financial systems would fall like dominoes if the American financial system were to take a tumble.

That’s not necessarily so, according to Terrance Carter, a Toronto attorney who heads a legal practice that specializes in church and charity law.

“Canadian markets do have a bit of separate buoyancy to them because we have a lot of resource industries which tend to be fairly much in demand,” he said in an Oct. 1 telephone interview with CNS from Orangeville, Ontario.

“Secondly, and probably most importantly, our banking system is not at all like, and is quite different from, the U.S.,” he said. “We’re not exposed to the subprime crisis as you (are) in the States. … The worst-case institutions in Canada tend to be one-tenth (as bad as) the worst-case scenario in the U.S.”

Still “it’s a global economy,” Carter said. “The impact that we’re seeing is that the availability of credit will be restricted. … Certainly some charities that may be dependent on credit for their operations, or running a line of credit, could be impacted by the subprime bank mess.”

As with U.S. citizens, Carter added, Canadians enjoy tax savings when they give stock to nonprofit institutions.

If stock prices plummet, there’s less incentive to give stock, because there is no capital-gains tax to pay, according to Carter. “Some large givers who may want to make a gift of publicly traded shares may be hesitant to do so.”