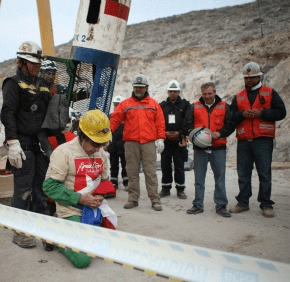 WASHINGTON – The story of the 33 miners trapped for 69 days in a Chilean gold-and-copper mine in 2010 is imbued with faith and religious imagery throughout.

Patricia Riggen, director of the film “The 33,” which opens nationwide Nov. 13, and actors Lou Diamond Phillips and Juliette Binoche said in interviews before a screening at the Newseum that faith is at the heart of the story.

The miners “endured very harsh things, things that we can’t even imagine,” Riggen said. The Mexico-born director tried to capture in the movie the source of their resilience. “It clearly comes from the love they have for their families. When they were down there, love for their families and faith in God were the two things that kept these men alive and together.”

She said the most inspiring part of directing the movie was meeting the miners themselves, “the 33” in the film’s title. “It’s the first thing I did when I got hired. Standing in front of this group of men is something I cannot describe,” she said. “They have such dignity and pain and love in their hearts that for me, I just wanted to do justice to their experience.”

Phillips said he knew this was going to be a beautiful movie, noting that he has been a part of uplifting movies such as “Stand and Deliver.” He committed to joining the movie before the script was finished and before he even knew what role he would play.

His character, Luis Urzua, known as “Don Lucho,” was “perhaps the most pessimistic of them all because he was the smartest one down there. He was the shift supervisor; he knew the mines in and out. He knew the chances of their rescue were astronomical especially as the days went by.”

The men drew together as a family, Phillips said. “These guys leaned on one another, they propped each other up, they kept each other hopeful as each had their individual meltdowns. It’s one of those films that, thank goodness, has a very happy ending.”

Phillips said the Latino culture in general and especially the Chilean culture is heavily Catholic, although one of the miners, known as “the pastor,” was actually a Christian preacher. “They prayed every day, they prayed together, they obviously had a deep faith that there was a greater good on their side.”

The actor said he could sense the faith of the miners with whom they worked on the movie. He was able to meet the character he played a couple weeks into the filming.

“He was very quiet, very reticent man. His faith was deep, his faith in himself, his faith in his family, a churchgoer every week. He wasn’t as demonstrative or as magnanimous as Mario Sepulveda (the de facto leader of the underground group, played in the movie by Antonio Banderas). He had his quiet faith and that’s one of the things that I tried to capture.”

After meeting Don Lucho, Phillips was glad that a lot of the choices he had made as an actor were accurate, “from the way I carried myself, from the way I walked, the sense that this man had spent his entire life in the mines. He had this quiet dignity that I wanted to capture.”

Phillips lost 18 pounds while working on the film, including 30 days – six days a week, 14-hour days – working in actual salt mines in Colombia. He restricted himself to 1,000 calories a day and did four hours of cardio exercise a day, in order to approximate the weight loss the miners experienced in their nearly 10 weeks trapped in the mine.

Binoche, who portrays Maria Segovia, the sister of one of the miners, who mobilized the families above ground to keep pressure on the government and rescuers, said the cast was inspired to portray the characters well because this is a symbolic story for all.

The resilience of the families, the rescuers and the miners came from “faith, there’s only faith that can save you.” Within that struggle sometimes comes a loss of faith, “but you have to meet yourself,” Binoche said.

“In circumstances so extreme like this you’re becoming even more yourself because there’s a knowledge of the end of the road, you are learning through that experience, and often you know yourself better or you die. There’s something about a difficult situation that is going to help you gain consciousness or reach some place within you that you never thought you could reach,” she said.

She acknowledged that at such points, the understanding that God is in control comes out. “Yes, you have to let go of your control and that’s how I think you can be convinced faith exists.” Binoche said the miners had to “give it to a bigger force than themselves to survive this,” she said. “They had been through hell, of course, but they also found some kind of light. That’s amazing.”

And as important as faith is, family is a high priority, too. The families of the miners who refused to believe their loved ones were hopelessly lost “are partly responsible for the survival of these men, not just the rescuers and the government,” Riggen, the director, said. “These families were screaming and crying in front of the world’s cameras and screaming to the government, demanding answers all the time.

“I love that we were able to put all of this in the movie.”