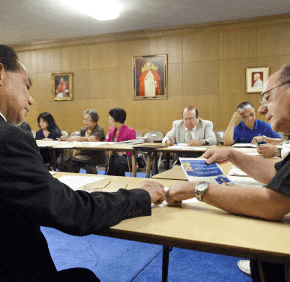 Filipino Catholic leaders have formed an archdiocesan-wide council to promote and foster solidarity among their communities and ministries. Under the guidance of the Archdiocese of Baltimore’s Department of Evangelization, the Archdiocesan Filipino Council also serves as a consultative body to Archbishop William E. Lori.

“Having a council like this in an archdiocese is really a blessing,” said Father Pete Literal, associate pastor of the Cathedral of Mary Our Queen in Homeland and the council’s chaplain. The archdiocese’s support is essential to the council’s success, he said.

Paulist Father John Hurley, director of the archdiocesan Department of Evangelization, serves as a liaison between the council and the archbishop.

“We see this as a new model of how to do ethnic ministry in the archdiocese,” Father Hurley said at the council’s second official meeting July 27 at the cathedral.

In recent years, Filipino leaders recognized that their communities and organizations were duplicating some efforts. The council is intended to help Filipinos and the archdiocese serve the community in a more organized manner, said Ruben Ballesteros, a parishioner of Church of the Nativity in Timonium and the council’s chairman.

The council acts as a “federation” of Filipino “key constituents,” Father Hurley said.

“Before this council, it was all personal communication – you might know someone in this parish or that parish,” he said. “This lifts up the Filipino presence as it is spread throughout the archdiocese.”

About 80 percent of the Philippines’ population of 103.7 million is Catholic, according to the U.S. State Department. Besides Timor-Leste, which has a population of 1.2 million, it is the only predominantly Catholic country in Southeast Asia. Filipinos have a long history of immigrating to the United States; a significant number began to arrive in the 1960s for job opportunities. Most of the council’s members were born in the Philippines.

“We believe we really have a lot to share, not only with the Filipino community, but with all the ethnic communities and everyone,” said council member Helen Sadorra, a parishioner of Immaculate Heart of Mary in Towson.

The council also hopes to create solutions for challenges facing the Filipino community, such as helping new immigrants access the sacraments or connect to a parish, council members said. Members also want to ensure their faith and values are passed onto the next generation.

The council is currently planning events to commemorate the feast of St. Lorenzo Ruiz, the first Filipino saint, including a 3 p.m. Mass Sept. 30 at the cathedral.