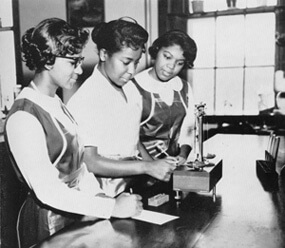 Ann Craig peeked into a classroom, scrutinized the science equipment and greeted a group of students working after school.

“We’re on a mission,” she said. “We’re looking for an old lady’s memories.”

Mrs. Craig was touring St. Frances Academy, where she was among the 46 women in the class of 1959.

The 50th anniversary of their graduation will be marked May 31, when St. Frances Academy sends off its class of 2009 at St. Matthew in Northwood. Mrs. Craig is on a reunion committee that is keeping tabs on the products of what in their day was known as St. Frances Academy Boarding and Day School.

“There were more day students than boarders,” she said.

The girl listed as Mary Ann Hall in the Counselor, the school’s 1959 yearbook, grew up on Presstman Street in West Baltimore and was a parishioner of St. Peter Claver.

She boarded the No. 13 bus to Greenmount Avenue, then the No. 8 to Chase, to get to St. Frances Academy. Classmates included girls from neighboring states, Illinois, Maine and more exotic locales, like Cuba and the British Honduras.

“Claribel (Perez Suarez) married one of Che Guevara’s men,” Mrs. Craig said of a classmate from Camaguey, Cuba, since deceased. “She got caught up in the resistance against Batista.”

Current events were covered in Sister Mary DeChantal’s “Problems of Democracy” class. Her students were in middle school when the Supreme Court’s Brown v. Board of Education ruling in 1954 led to the desegregation of the nation’s public schools.

St. Frances Academy was a rare beacon of opportunity for young black women. Mrs. Craig said that male friends “thought we were ladylike. Some felt we would all become nuns.”

The Oblate Sisters of Providence have been the driving force at St. Frances Academy since it opened in 1828 as the first Catholic school for black children.

The foundress of the Oblate Sisters started St. Frances Academy. Mother Lange is a candidate for sainthood, but Mrs. Craig said that less was spoken about her in the 1950s.

“That’s not to say that the sisters didn’t mention her,” Mrs. Craig said, “but I didn’t hear much about Mother Lange when I was a student.”

“Because of Sister Naomi (Immaculate), to this day I look at words and know their origin,” Mrs. Craig said.

She stopped in the chapel, recalling three-day retreats there in a space that is due a restoration.

“We need to restore the Eucharist,” said Esther Sanders, a St. Frances Academy teacher who is also a campus minister. “We want the restoration to be historically accurate.”

One floor below, a door marked cafetorium leads to the space that was once was the site of assemblies and proms. Cynthia Maria Stokes Chideya delivered the valedictory address for the class of 1959 at its graduation there.

Mrs. Craig and nine others became teachers. Two went into nursing, and two served in the Peace Corps.

All of their classes were taught by Oblate Sisters except gym, which was conducted in view of inmates at the Baltimore City Penitentiary, just to the south.

“The prisoners could holler at us,” said Mrs. Craig. “The sisters didn’t think that was ladylike, so we didn’t do much in gym.”

On the field where female students once played, St. Frances Academy opened its new gymnasium in 2002. The school began accepting male students in 1974, and Mrs. Craig had her walk down memory lane on the same day that 2008 graduate Sean Mosley, a starter for the University of Maryland men’s basketball team, paid a visit.