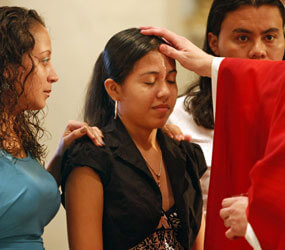 WASHINGTON – Statistically, there are few surprises in the 2009 Official Catholic Directory.

But here and there, there are signs of hope in the statistical summary that is designed to present a snapshot of what the U.S. Catholic Church looked like on Jan. 1, 2009.

The totals for priests, permanent deacons and diocesan seminarians each experienced a small increase in the 2009 book. There were more students in Catholic colleges and universities; in private, Catholic-run high schools and elementary schools; and in high school religious education programs.

And at 68.1 million, an increase of nearly 1 million over the 2008 directory, Catholics continue to make up 22 percent of the U.S. population.

The more than 2,100-page Official Catholic Directory, also known as the Kenedy directory after its New Jersey publishers’ imprint, P.J. Kenedy and Sons, is due out June 17. Catholic News Service obtained an advance copy of the statistical summary compiled from annual reports provided by the nation’s 209 dioceses and archdioceses.

The book lists all ordained U.S. Catholic priests, parishes, missions, schools, hospitals and other institutions. It also gives statistical data on the church by diocese and nationally. Its national figures include data from Puerto Rico, a U.S. commonwealth, and U.S. territories overseas such as the U.S. Virgin Islands, American Samoa and Guam.

The latest edition also features special reports on Catholic higher education in the U.S., the year of St. Paul celebration, a look at the sainthood process and the year in review.

In a time of economic downturn, it was not surprising to see a rise of 1.2 million in the number of people assisted by Catholic charitable agencies, from just under 26 million in the 2008 directory to 27.2 million the next year.

The number of patients served in Catholic hospitals went up nearly 1.5 million, from 83.8 million last year to 85.3 million in 2009. The 562 Catholic hospitals in the 2009 tally were five more than the 557 counted in the 2008 directory, but the number of Catholic-run health care centers – including ancillary care systems, medical centers, sanatoriums and hospices – declined from 417 to 373. Another 6.7 million patients were served in those centers, according to the 2009 book, a drop of more than half a million from the 7.3 million patients served the previous year.

In key sacramental moments, according to the directory:

– Adult baptisms and receptions into full communion totaled more than 124,000, a decline of more than 12,000 from the previous year.

The total number of priests in U.S. dioceses and religious orders was 41,489, an increase of 83 over the previous year. The increase was 89 for religious-order priests, offsetting a decrease of six for diocesan priests.

There was a mixed picture for Catholic education in the United States.

But the student populations at diocesan- and parish-run Catholic schools continued to decline. There were 361,653 students at those high schools, a drop of nearly 13,000, while the number attending diocesan or parish elementary schools was 1,518,886, a decrease of more than 57,000.

The faculty at Catholic schools was overwhelmingly made up of lay teachers, at nearly 168,000. There were 1,569 priests, 27 scholastics, 916 brothers and 5,169 sisters teaching in Catholic schools at the start of 2009.