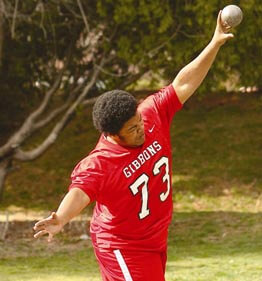 Cardinal Gibbons School’s head track coach, Donald Davis, is in his sixth and final season at the Baltimore school with a team that he has built from scratch. The nuts and bolts of the football and track programs, Davis has been a mainstay for the Crusaders and looks to lead his track team to yet another Maryland Interscholastic Athletic Association B Conference title.

In the early days of Coach Davis’ reign, the team was built from off-season football players looking to stay in shape and the pick-up athletes cut from the spring baseball and lacrosse teams.

With hard work and determination, the Crusaders won three back-to-back MIAA B Conference championships in 2002, 2003 and 2004 before Baltimore Lutheran took the title in 2005.

The red and white bounced back with a tenacious spirit, and Gibbons rolled to a sweeping title victory in 2006. It’s clear that Davis, who is heading to Calvert Hall College High School, Towson, next fall, has built a well-oiled machine.

With 30-plus athletes spread out over 18 events, the team looks strong again this season, but Coach Davis knows that The John Carroll School, Bel Air, and Baltimore Lutheran are on their heels, looking for a title championship of their own.

“I try to make the point to our team of not worrying about winning or losing,” said Davis. “Just get better each and every day and the rest will take care of itself.”

The Crusaders are led by senior captains Vinnie Mercer and Barry Nowell. Mercer, a four-year varsity runner, has come up through the ranks of the Gibbons middle school, spending six seasons with the team. Mercer is fast with a top-notch work ethic. Nowell covers the jumping events and recently recorded a 19-foot-7-inch long jump and a 39-foot-2-inch triple jump.

Junior Troy Lewis and sophomore Blake Thompson are also top contributors to the Crusaders’ success in the field events, both posting more than 19 feet in the long jump this season.

With only five seniors on the team, this is one of the youngest squads in Gibbons’ recent history, but according to Davis, it is also one of their most talented.
Gibbons’ distance events are assigned to juniors Connor Scott and Ryan Kelly, both keeping their mile-time in the 800-meter race and the two-mile event right around 5:30. Senior Sean Kearney has also provided solid performances in his leg of the 4 x 800 race.

Davis also highlighted the efforts of junior Jeremy Powe. “Jeremy is our unsung hero. He always gives us a solid leg in the relays.”