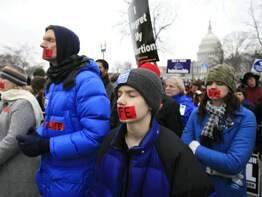 WASHINGTON – The last prolife bill to be considered by the 109th Congress became one of the first introduced in the 110th Congress when Sen. Sam Brownback, R-Kan., reintroduced the Unborn Child Pain Awareness Act.

The legislation, which died in the House of Representatives Dec. 6 when it failed to receive the two-thirds majority needed to break a procedural impasse, would require that women undergoing an abortion at least 20 weeks into their pregnancy be informed that an abortion causes pain to the fetus.

The bill also would give women the option of choosing anesthesia for their unborn child to lessen his or her pain during the abortion.

In the 109th Congress, Rep. Chris Smith, R-N.J., had sponsored the House version of the legislation, called the Unborn Child Pain Awareness Act. The U.S. bishops had remained neutral on the bills, but they will work for passage of the latest legislation, said Deirdre McQuade, director of planning and information in the bishops’ Secretariat for Pro-Life Activities.

The fetal pain legislation was far from the only life-related legislation proposed in the first weeks of the 110th Congress, however.

Ms. McQuade said the prolife secretariat will be working for passage of legislation that would make “truly constructive changes in the lives of women and their unborn children.”

One such proposal is the Pregnant Women’s Support Act, to be introduced sometime soon by Rep. Lincoln Davis, D-Tenn. The legislation will provide resources “to help women make life-affirming choices for themselves and their children,” Ms. McQuade said.

Among its many provisions, the bill will expand eligibility for the State Children’s Health Insurance Program and for the Women, Infants and Children nutrition program, and provide assistance to victims of domestic violence. Pregnant and postpartum women are among those most likely to experience domestic violence, studies have found.

The legislation also includes provisions that will require medical professionals to provide information about abortion and alternatives to abortion that leads to truly “informed consent,” Ms. McQuade said.
Also receiving the bishops’ support in the 110th Congress will be the Elizabeth Cady Stanton Pregnant and Parenting Student Support Act, introduced in the 109th Congress by Sen. Elizabeth Dole, R-N.C., and Rep. Melissa A. Hart, R-Pa., who is no longer in Congress.

By offering housing, day care and academic accommodations to those who are “pregnant or parenting while pursuing their education,” the bill will give students choices beyond the usual “abort or drop out of school,” Ms. McQuade said.

The USCCB also supports the Child Interstate Abortion Notification Act, which “came awfully close to passing last year,” Ms. McQuade said. It would make it illegal for an adult who is not a minor’s parent or legal guardian to take the minor across state lines for an abortion in order to avoid her own state’s parental notification or consent laws.

The legislation is called the Child Custody Protection Act in the House.

Ms. McQuade said the prolife secretariat also would continue to work for passage of the Abortion Non-Discrimination Act, which would guarantee the conscience rights of individuals or institutions who choose not to participate in abortions, and will work to keep in place several provisions that prevent federal tax money from being used to pay for abortion.

The USCCB will oppose efforts to expand federal funding of stem-cell research involving human embryos and will support the Alternative Pluripotent Stem-Cell Therapies Enhancement Act, which would fund “lots of kinds of legitimate stem-cell research” that does not destroy embryos, she said.
Another goal will be approval of the RU-486 Suspension and Review Act, also known as Holly’s Law, which will remove the abortion pill from the market until its safety can be reviewed by the Food and Drug Administration. Holly Patterson, 18, died in California in 2003 after taking RU-486.

Some other bills before the 110th Congress might sound prolife or pro-woman but are deceptively named, according to Ms. McQuade.

For example, the Prevention First Act says its goal is to “expand access to preventive health care and education programs to help protect women’s reproductive health, reduce unintended pregnancies, prevent the spread of sexually transmitted diseases and provide women with the tools they need to make the best decisions possible for themselves.”

But that bill puts a “heavy emphasis on contraceptive mandates” and does not support pregnant women at all, Ms. McQuade said, adding that the USCCB will actively work for its defeat.

She also called the legislation unethical, because it would force pharmacists and hospitals to offer emergency contraception in violation of their conscience rights.

Also touted as a compromise bill by both supporters of keeping abortion legal and those who oppose abortion in Congress is the Abortion Reduction and Pregnant Women Support Act.

“They believe that to reduce abortions you need to increase access to contraception,” Ms. McQuade said. “But that doesn’t work. Study after study has shown that abortions actually go up, not down, when there is more contraception.”