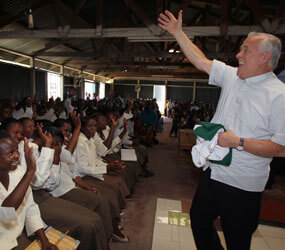 NAIROBI, Kenya – Mass was approaching the two-hour mark at St. Mary’s Church. Members of the choir were wiping the sweat from their brow under the heat of the corrugated tin roof. Some of the dancers were fanning themselves with the tri-fold papers that contained the Sunday readings.

Yet 50 minutes later, when the announcements were over and the concelebrants had processed out, the choir members – accompanied by shiny red bongos, shakers and a Yamaha keyboard hooked up to an amplifier – were still singing, moving, gesturing, ululating – expressing their praise of God.

The more than 50 choir members rehearse three times a week for one and a half hours each session. The choir boasts nearly the same number of men as women. When they sing, they don’t hold sheet music; they clap, raise their hands in praise, turn around, move their feet and arms.

“I think our church in Kenya is visibly and organically young – both in spirit and in average age,” Bishop Muheria told representatives of U.S. diocesan mission offices Feb. 12, the day before the Mass.

The joy, he said, is palpable and uplifting, and “the fervor and devotion of our Christians is admirable.”

“Whenever you meet them in a prayer place, in a prayer setting, our people teach us, and I’m speaking (of) us as shepherds,” he said.

The bishop said Kenyan Catholics are willing to give God their time. He said when he sits with them to talk, no one gets edgy or looks at a watch.

“On Sunday we come at 10 – they are willing to stay there until 2 – sometimes under the sun,” he said.

The congregants sat on wooden benches in a church lit by natural light – only the altar area had small fluorescent lights – and the celebratory nature of the Mass was palpable.

Young teen dancers wearing blue T-shirts that read “Save the Lord with joy” led the entrance procession. The congregation sang enthusiastically during the four-minute opening song as the priests processed up the three steps to the altar, under a drop ceiling framed by a valance decorated with brightly colored streamers.

Throughout the Mass, the choir members in their brown or black skirts and pants and ivory blouses and shirts led the rest of the congregation in song. The congregants sang during the procession for the Book of the Gospels. They sang the responsorial psalm. They sang for five minutes after the homily, and each petition was greeted with a sung response. They sang during the collection and as the five collection boxes were carried in the offertory procession, with the chalice, hosts, baskets of vegetables, flour, rice, bread, toilet paper and other necessities to help the less-fortunate members of the parish – all of whom live in Mukuru.

The choir, still accompanied by bongos, shakers and keyboard, sang during the handshake of peace, then went right into another song to accompany the liturgical dancers.

After Communion, the choir sang a six-minute song of welcome for their American visitors, who were on a trip sponsored by the Pontifical Mission Societies in the United States and Maryknoll. Two Maryknoll priests stood and joined the celebratory dance.

“I want to take you all back to America,” he said to cheers. “Do you know why? Because you can teach the people of America how to celebrate!”

Editor’s Note: CNS International Editor Barb Fraze and Visual Media Manager Nancy Wiechec are in Kenya on a trip funded by the Pontifical Mission Societies in the United States.