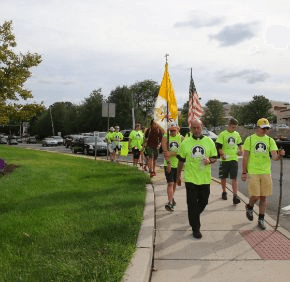 pmcmullen@CatholicReview.org
Twitter: @ReviewMcMullen
LANSDOWNE, Pa. – The Feet for Francis Pilgrimage of Love and Mercy reached its penultimate stop Sept. 26, pulling into St. Philomena Parish just as Father Paul Castellani was consecrating the Eucharist for 5:15 Mass.
Father Jack Lombardi’s original group of 21 pilgrims has picked up some additional family members since it left the Basilica of the National Shrine of the Assumption of the Blessed Virgin Mary in Baltimore Sept. 20, and significant support along the way, from motorists on the road, on social media and on national network television.

Taking back roads out of Neumann University in Aston, the pilgrimage returned to Baltimore Pike just before the town of Media, where a tab of $124.38 for Philly cheese steaks and pizzas shrunk to $41.64 after the lunch crowd recognized us as the folks featured in the Delaware County Times and opened their wallets and hearts.
NBC News correspondent Miguel Almaguer and a team from the network joined us for the next several miles, then drove ahead to St. Philomena for the arrival of a group that ranges from 69-year-old Eun Ya Williams, a former parishioner of St. Timothy in Walkersville who now resides in Berkeley Springs, W.Va.; a large contingent from the Life Teen group at St. John Parish in Westminster, and 9-year-old Philomena Tiller, a parishioner of Father Lombardi’s at St. Peter in Hancock.

Father Jack Lombardi sits down for an interview with Miguel Almaguer, NBC Nightly News, after the 5:15 PM Mass at St. Philomena Parish. (CR Staff / Maureen Cromer)
The day’s march was approximately 13.5 miles, meaning that a handful of pilgrims have walked a little more than 105 miles through Baltimore City, three Maryland counties and two in Pennsylvania. Many have taken multiple breaks in our support vans, to rest their feet and heal repetitive stress injuries.
Pilgrims walked into St. Philomena, which dates to 1898, and saw a gorgeous interior reminiscent of many of Baltimore’s great 19th century churches. Father Castellani blessed four young religious men and women visiting from Ohio, Sisters Teresa and Sarah, and Brothers James and Brian, before bestowing his blessing on the Feet for Francis pilgrims.
We’ve bedded down in a high school gymnasium in Bel Air at The John Carroll School; a college auxiliary gym at Neumann University, and now the gym in a former parish school, which is adorned with CYO basketball banners.
We will walk another six miles Sunday, give or take security stops, before joining the throng anticipated for the 4 p.m. Mass Pope Francis will celebrate along Benjamin Franklin Parkway Sept. 27.
The blessings of the parish and Father Castellani include a gift of papal Mass tickets in the area reserved for Archdiocese of Philadelphia parishes.
Afterward, the plan is to walk back to St. Philomena, pile people, clothing and sleeping bags into multiple vehicles – including the 15-passenger van donated by St. Ignatius Parish in Baltimore – and return as a group before bidding farewell at a dispersal point near White Marsh Mall.

Click here for more stories about the papal visit to America.