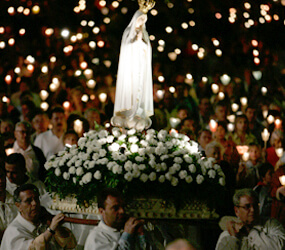 VATICAN CITY – Ten years after the Vatican divulged one of the church’s best-kept secrets – the third part of the message of Fatima – a small band of skeptics and critics are still questioning the official explanation.

More than 100 of them gathered at a hotel not far from the Vatican in early May for a weeklong conference on such topics as “Fatima and the Global Economic Crisis,” “The Present Need for the Consecration of Russia” and “Is There a Missing Text of the Third Secret?”

For those in attendance, the answer to that last question is a no-brainer.

“The evidence points to only one conclusion: that something has to be missing,” said Christopher A. Ferrara, a U.S. attorney and Catholic commentator who spoke at the conference.

Ferrara pointed to what he described as a series of incongruities and inconsistencies in the Vatican’s version. Among people truly familiar with the events at Fatima, he said, only a minority “cling steadfastly to the notion that an ambiguous vision of a bishop dressed in white outside a half-ruined city is all there is to the third secret.”

That’s the heart of the question for people in the “Fatima Challenge” movement. They argue that the third secret of Fatima was a prophecy so traumatic and dire that several popes decided not to make it known to the faithful, and yet the text published in 2000 contained little more than an allegory about the church’s past struggles with 20th-century ideologies.

They say there’s good reason to believe the third secret wasn’t just about the church battling outside forces, but about Satan working in the church – at the highest levels. Some have deduced that the secret foresaw the changes of the Second Vatican Council, especially in liturgy and ecumenical dialogue, as part of the “great apostasy” which church leaders refuse to acknowledge.

Most recently, several of these “diehard Fatimists” – as a Vatican official once described them – have suggested that the priestly sex abuse crisis in the church is a clear sign of the crisis of faith and pastoral negligence prophesied, they say, by Mary at Fatima.

The conference took place a few days before Pope Benedict XVI’s visit to Fatima, and organizers went out of their way to invite the pope and Vatican officials. None showed up. The pope’s Vatican aides consider the “Fatimists” a fringe element that is best ignored.

Cardinal Tarcisio Bertone, the Vatican secretary of state, has said one of the reasons the third secret was made public in 2000 was that people were spreading “absurd theses” about catastrophic events or heresy at the top levels of the church.

Cardinal Bertone, who was personally involved in the publication of the third secret, said he was puzzled that some still think the Vatican is hiding something. In 2006, an Italian journalist wrote a book titled “The Fourth Secret of Fatima” that laid out a Vatican conspiracy theory, prompting a new round of publicity.

In 2007, Cardinal Bertone wrote his own book, “The Last Visionary of Fatima,” which reiterated the official version of the Fatima messages and secrets and was based, he said, on long conversations with Carmelite Sister Lucia dos Santos, the last of the visionaries to die. In TV appearances, the cardinal strongly denied theories of a Vatican cover-up.

Pope Benedict was also personally involved in publishing the third secret. As Cardinal Joseph Ratzinger, the Vatican’s top doctrinal official, he presented the text of the secret to the press and wrote a lengthy commentary about it.

That news conference on June 26, 2000, is still memorable for Vatican journalists. The stage was set for disclosure of a text that for decades was thought to be too disturbing to reveal. But instead, Cardinal Ratzinger began by deflating expectations and announcing that there was nothing apocalyptic.

“No great mystery is revealed; nor is the future unveiled,” he said. He went on to give a theological framework to the apparitions and messages of Fatima, insisting that in the church’s tradition, “prophecy” is not like a “film preview,” but more like offering signs that can be useful for Christians.

Cardinal Ratzinger said that was how to understand the third secret’s vision of a “bishop in white” who struggles up a hill amid corpses of slain martyrs, and then falls dead after being shot by soldiers. Whether this bishop symbolized Pope John Paul II, who was shot and wounded on May 13, 1981, or a “convergence” of several 20th-century pontiffs who helped the church ward off the dangers, it doesn’t mean someone must be killed, the cardinal said.

That explanation still sticks in the craw of “Fatimists,” who say it deliberately removes the vision’s apocalyptic scenario and lulls the faithful into a false sense of security. The Vatican’s version, they say, suggests these problems are behind the church, when in their view the worst is yet to come.

Father Nicholas Gruner, a Canadian priest who founded “The Fatima Crusader” magazine, has long maintained that Russia has yet to be consecrated to Mary in accordance with the instructions of Our Lady of Fatima.

“We haven’t had the conversion of Russia by any stretch of the imagination – not militarily, not morally. It’s the largest abortion capital of the world. … There’s just no sign of conversion in any sense,” Father Gruner said in Rome May 6.

That’s another issue the Vatican is tired of dealing with. Church officials say Pope John Paul II in 1984 led the world’s bishops in the consecration of Russia and the world. The late Sister Lucia, one of the three Portuguese children who saw Mary in 1917 and the one who received the instructions for the consecration, had said that it was properly performed.

The Fatima messages are not dogma, and the church does not impose belief or any single interpretation. That seems to ensure that the “Fatimists” will continue to broadcast their theories to whoever will listen.