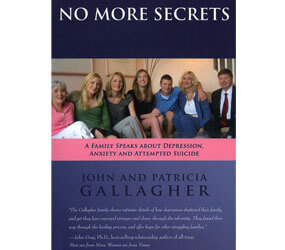 WASHINGTON – Patricia Gallagher vividly recalls the day in 1999 when she was dropping off film to be developed and a kind Wal-Mart clerk asked whether her husband, John, who was in a wheelchair, had been in an accident.

“No, he jumped out of a third-floor window,” Gallagher told the clerk in a rush of words. “But don’t tell anyone because even two of our kids don’t know” that their father had attempted suicide.

“I was so embarrassed at what I’d said that I never went back to pick up the photos,” Gallagher said in a June 4 telephone interview with Catholic News Service from her suburban Philadelphia home.

But the Gallagher family – John, Patricia and their four children, now ages 18 to 26 – has moved beyond embarrassment and now wants to help others by sharing the story of John’s return from depression and a suicide attempt that crushed both his legs.

In their new book, “No More Secrets: A Family Speaks About Depression, Anxiety and Attempted Suicide,” each member of the family – including Patricia’s mother, Claire Mohan – tells the story from his or her own perspective. The second half of the book offers advice and resources for families confronting similar problems.

John Gallagher says in the book that since his decision to go public, “I feel like a sack of bricks has been lifted from my back.” He believes that “God spared me for two reasons: so that I could heal and be a father for my kids, and so that I could help other families deal with comparable experiences.”

The Gallaghers, who now belong to St. Jude Parish in Chalfont, Pa., were once the picture-perfect family. Patricia, who like John holds a master’s degree in business administration from St. Joseph’s University in Philadelphia, wrote a book in the late 1980s called “Raising Happy Kids on a Reasonable Budget” and the family was twice featured on segments about frugal living on “The Oprah Winfrey Show.” They also appeared on the television game show “Family Feud.”

But within a few years, John Gallagher was becoming increasingly anxious and depressed about an expected restructuring at his company and the possibility of layoffs.

“I say depression was a robber,” said Patricia Gallagher. “It robbed me of my relationship with my husband. It robbed the kids of their father. It robbed us of our home – we moved four times in two years.”

But in the years after John Gallagher jumped from the third floor of a hospital where the family had brought him for emergency treatment, depression and attempted suicide became “like the elephant in the living room” and never discussed, Patricia Gallagher said. Most of their friends and neighbors followed suit and ignored the situation, she added.

Patricia took comfort in daily visits to the local monastery of the Poor Clares and in the words of a stranger also visiting there who told her, “God has something mighty planned for you.”

“I found God,” she said of that period of her life. “If I hadn’t gone through this, I would have missed out.”

Although she says that if someone offered her $1 million “to go back to when all this started” and live it over again, she would not take the offer, because “it was worth a million dollars for everything we’ve learned as a family.”

Patricia Gallagher also took solace during that time in her “Team of Angels” project, which grew out of a poem she wrote in a bleak moment: “I need a team of angels, Lord/ I don’t think one will do./ Please send me all the help from high/ For what I am going through.”

To date, more than 100,000 sets of the gold pins depicting a trio of angels have been distributed around the world.

It was not until early 2008, when he read about a local teenager who had survived a nine-story jump while attempting suicide, that John Gallagher decided to speak out about his own experiences.

“I am not going to let this happen to one more family,” he recalled telling his wife. “This boy is telling my story.”

It’s also a story that Patricia Gallagher believes is being lived over and over by thousands of autoworkers and workers in other industries – and by their families – during these economic hard times.

She urged families to watch for signs of depression in their loved ones – among them irritability, loss of interest in activities, fatigue, appetite loss or overeating, difficulty concentrating and even risky or abusive behavior.

The couple now speaks before various groups, including chapters of the National Alliance on Mental Illness, and wants to take their message to parish, workplace and community groups as well.

The main advice that Patricia Gallagher would offer to families affected by depression is: “Don’t isolate yourselves. Reach out for help. Don’t be too embarrassed to ask for help.”

And her advice for friends and neighbors of those experiencing hard times? Do something to show your concern. “Drop a note in their mailbox. Take over a casserole.”

More information about the Gallaghers and how to purchase their book is available at www.speakingaboutdepression.com or www.teamofangels.com. The cost of the book is $19.95 plus shipping and handling.