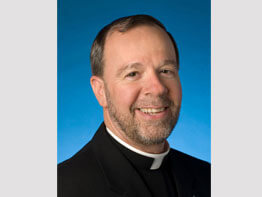 In a July 11 meeting near Paris, delegates from 11 countries elected Father Ronald D. Witherup, S.S., the 26th superior general of the Sulpicians. Father Witherup most recently served for more than a decade as his society’s provincial leader of the Baltimore-based Province of the United States.

The Sulpicians, formally known as the Society of the Priests of St. Sulpice, are an international society of diocesan priests focused on the education and formation of priests and future priests. Among their ministries in Baltimore, the Sulpicians operate St. Mary’s Seminary and University.

In a telephone interview from Paris, Father Witherup told The Catholic Review his top priorities as superior general will be promoting unity, communicating the society’s pedagogy and recruiting new members.

“Every bishop wants to keep their own priests because they all have needs in ministry,” said Father Witherup, noting that priests must have the permission of their bishops to become Sulpicians. “So it’s a challenge to recruit new members.”

Worldwide, there are 320 Sulpicians, 71 of whom serve in the Province of the United States. The priests minister in approximately 13 countries, with the society growing fastest in Africa and South America – areas where religious vocations are flourishing, Father Witherup said.

“Where there are more vocations, there is a need for formation in the seminaries,” he explained.

“The biggest challenge is trying to get young men to realize that the priesthood is a permanent commitment,” he said. “So many things militate against that.”

Father Witherup called himself a “strong believer” in the vision of Father Jean Jacques Olier, a 17th-century priest who founded the Sulpicians in France.

“He believed that the way to renew the church is to renew and reform the clergy,” Father Witherup said. “If we cultivate a strong priesthood, which I believe we are doing, that will have a major affect on the life of the church.”

Father Witherup, 58, is a priest of the Diocese of Erie, Pa. A Scripture scholar and author, he was ordained in 1976 and became a Sulpician in 1981.