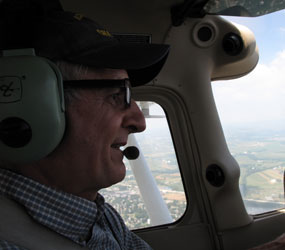 ESSEX – Conventual Franciscan Father Ross M. Syracuse is reminiscing about his theology studies at the University of Fribourg in Switzerland.

“One of my favorite things there was hiking the Alps,” he says. “I guess I have a thing for heights.”

To reiterate that point, he relaxes his grip on the controls of a Cessna 172 and admires the view. He is just south of Jarrettsville, descending from an altitude of some 5,000-feet near the end of a round-trip flight Aug. 11 from Martin State Airport to Lancaster, Pa.

His avocation is solace to St. Casimir in Canton, where parishioners rue the impending departure of the pastor they call Father Ross. He is being transferred to a parish in his hometown of Buffalo, but his pilot’s license means he won’t be a stranger, as he has already logged the 2-hour, 15-minute flight between here and there.

“This is not going to be easy for us, we’re very sad to see him go,” said Donna Derkacz, the St. Casimir parish secretary. “Father Ross touched all of our hearts.”

That was apparent Aug. 15, when more than 300 packed into the UAW Hall south of Greektown for a surprise farewell party for Father Ross. The 10 a.m. Mass Aug. 22 at St. Casimir will also celebrate his time there.

How many other priests have been perilously late for 5 p.m. Sunday Mass because of a flat tire on their landing gear?

Father Ross came to Canton as an accomplished runner. In 1993, in the span of two weeks and at age 42, he ran the Boston Marathon in 3 hours, 7 minutes, then Buffalo in 3:05. By 1997, when he came to St. Casimir, his knees were giving out and he was ready for another hobby.

“When I first got to Baltimore, I was strolling the grounds at our place (the Friars of St. Anthony Province) in Ellicott City,” Father Ross recalled. “A half-mile as the crow flies, there was a landing strip.”

He’s studied at Martin State Airport, where Maryland Air National Guard C130s dwarf the four-seater he favors. Father Ross recently became instrument-rated, meaning that he is licensed to have his head in the clouds, literally.

“This is what I find pretty,” he says, slicing through clouds over the state line, visible on the GPS screen on his control panel.

Franciscans take a vow of poverty, meaning that Father Ross uses his allowance to rent aircraft.

“The car I drive is not registered to me, it belongs to the friars,” he says. “Technically, I have no possessions.”

As gentrification came to Canton, St. Casimir underwent its own transformation. In addition to overseeing handsome church renovations, Father Ross served Baltimore City as a chaplain for the police and fire departments, the source of some of the commendations he received last Sunday.

Those familiar with his order aren’t surprised that it produced a pilot priest.

St. Joseph of Cupertino, the levitating patron saint of aviation? He was a Franciscan.