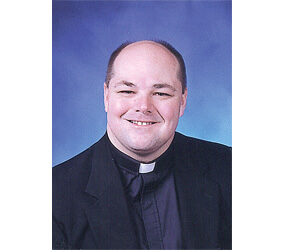 It’s been difficult not to reminisce over the last few weeks for Father James D. Proffitt.

The eight-year pastor of St. Michael the Archangel in Overlea said the final Mass for students at the parish school before summer break. On June 10, he witnessed the confirmation of 51 young people from the parish.

“It’s been neat watching them grow up,” Father Proffitt said. “A number of them I participated in their first reconciliation. I have a lot of pride watching them.”

It’s time, however, for a new challenge. Father Proffitt has been assigned as pastor of St. John the Evangelist in Severna Park. The Carroll County native, a former Baptist, will start there in July.

While sad to be leaving behind the many friends he made at St. Michael, Father Proffitt realizes he has to put aside personal satisfaction.

“That’s one of things about being in the priesthood,” Father Proffitt said. “It’s not about building up personal kingdoms. It’s about serving where you’re needed the most.”

Former St. John pastors include Auxiliary Bishop Mitchell T. Rozanski and Monsignor Richard W. Woy, who left last November to become chief operating officer of the Archdiocese of Baltimore. Monsignor Robert. J. Jaskot has since been serving as administrator of the parish.

He will lead a parish that takes great pride in Catholic education. St. John the Evangelist School was named a No Child Left Behind Blue Ribbon School by the U.S. Department of Education in 2008.

“I’ve just been real impressed with the school board and administration,” Father Proffitt said. “They really have some excellent academic programs where our faith is reinforced. Ultimately, that’s one of our great missions of evangelization.”

Father Proffitt said he has placed an emphasis on serving people and God.

“It’s not about bricks and mortar,” he said. “It’s about flesh and blood.”

The priest added that he is “more of a builder than a maintainer,” and hopes to foster spiritual and physical growth at St. John.

“I believe the Eucharist needs to be at the center of it all,” Father Proffitt said. “That’s what calls us all together as a community.”