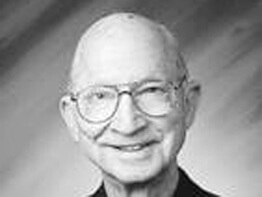 In his 60 years as a priest, the ministry Father Casimir Peterson said he most enjoyed was his 12 years serving patients with mental illness at St. Elizabeth’s Hospital in Washington, D.C.
The priest remembered one schizophrenic patient in particular who had refused to eat or drink for weeks and ultimately had to be force fed. Knowing the patient was Catholic, his psychiatrists asked Father Peterson to talk with him. After a few hours, the priest convinced the man to start eating again.
“I was able to reach him in a way no one else could,” said Father Peterson, 86. “It was the salvation of his life. That was a wonderful high point of my priesthood.”
Father Peterson said he was inspired to become a priest through his service as an altar boy and through the guidance of the sisters who taught him at Our Lady of Pompei, Highlandtown.
After attending St. Mary’s Seminary in Roland Park and being ordained in 1947 for the Archdiocese of Baltimore, Father Peterson served as a Sulpician until 1956. While teaching at St. Charles College, a minor seminary in Catonsville, he finished his graduate work and was transferred to St. Joseph in California and then St. Edward in Seattle. Before returning to the archdiocese in 1956, he acquired a doctorate in canon law. He eventually left the Sulpicians and became an associate pastor at St. Clement Mary Hofbauer, Rosedale; St. Ann, Baltimore; and Our Lady of Good Counsel, Baltimore.
While serving at Our Lady of Good Counsel he worked part time in the matrimonial tribunal. After leaving Our Lady of Good Counsel, he worked full-time at the tribunal while he was in residence at St. Mary, Star of the Sea, Baltimore, and St. Brigid, Canton.
In 1968 he was appointed pastor of St. Lawrence Martyr, Jessup, for three years as he continued part-time duties at the tribunal. He then became pastor of Holy Family, Randallstown, but was no longer involved with the tribunal.
After two years, Father Peterson served at St. Elizabeth’s Hospital, a federal psychiatric hospital. He completed an internship in clinical pastoral training, and was involved in pastoral care for patients and helped train others in clinical pastoral care.
Father Peterson retired in 1988. In 1993, he was appointed spiritual director of the Reparation Society of the Immaculate Heart of Mary in Baltimore. The priest was elected president of the society in 1996. Since then, Father Peterson has offered a radio rosary each morning Monday through Friday, and he sends out monthly newsletters.