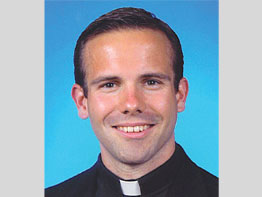 Father Patrick Peach is turning in his black clerics and white collar for a brown tunic.

With the permission of Archbishop Edwin F. O’Brien, the associate pastor of St. John in Westminster is leaving the Archdiocese of Baltimore to become a Hermit of the Most Blessed Virgin Mary of Mount Carmel. The 29-year-old priest will enter the Carmelite Monastery in Lake Elmo, Minnesota, Jan. 11.

While he has loved serving as a parish priest, Father Peach told The Catholic Review he has long been attracted to monastic life after studying the spiritual works of the desert church fathers. When he was preparing to become a priest for the Baltimore archdiocese at the Pontifical North American College in Rome, he had considered becoming a Trappist monk.

After reading “Dark Night of the Soul” by St. John of the Cross, Father Peach said he was deeply moved by the Carmelite’s focus on the crucified Christ. Father Peach witnessed the solemn profession of a St. Louis, Clarksville, parishioner as a Carmelite nun at Lake Elmo and was further inspired by the men who lived as hermits there.

“As soon as I visited the monastery, it felt like a homecoming,” said Father Peach, a graduate of Calvert Hall College High School in Towson who was ordained in 2006.

“I feel like I’ve discovered a deeper call to a life of prayer and a desire for a life of self denial – to live for God alone,” said Father Peach, who participated in a 10-day retreat in August at the monastery.

The life of a hermit is appealing, he said, because it is very simplistic and totally focused on God. As a Carmelite, Father Peach will spend much of his day in prayer and spiritual reading. His order observes periods of silence and solitude. As a hermit, he will also contribute to the community life through manual labor at the gardens, leatherworks shop and an icon studio. The hermits pray for people who send prayer requests through the mail.

“They are still building the monastery,” he said, “so that will be a major part of the work.”

Father Peach, a former parishioner of Immaculate Conception in Towson, acknowledged that the life of a hermit will be radically different from that of a parish priest. His entire ministry will be confined to the monastery and his only visitors will be immediate family members during certain times of the year. It will be a challenge to observe periods of silence, he said.

“Nothing can prepare you for it,” he said.

Father Peach said he believes God is calling him to a life of sacrifice.

“At some point, I decided in order to live an authentically Christian life, I had to love the cross and place myself before the crucified Christ without any filter,” Father Peach said. Father Peach will undergo six months of postulancy before receiving a Carmelite habit and a new name. The habit consists of a hooded tunic, sandals, a leather belt, a scapular and a full rosary. Father Peach will then begin a two-year novitiate before professing temporary and then final solemn vows. When he is a full-fledged hermit, he will receive a crucifix as part of his habit.

While at Calvert Hall, Father Peach studied in the school’s highly-regarded art program. If his superiors would like him to share his artistic talent, the priest said he is open to helping make icons at the monastery.

St. John will host a farewell liturgy at the Dec. 28 noon Mass.