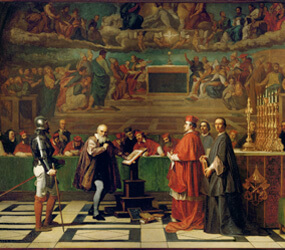 WASHINGTON – When Galileo Galilei first turned his simple telescope toward Jupiter, the moon and then the sun nearly 400 years ago, it’s not difficult to imagine how amazed he was.

Known as the father of modern science, Galileo meticulously recorded the motions of the four largest satellites of Jupiter and drew images of Earth’s moon that showed it to be much more geographically complex than the smooth sphere others imagined. The sun, he concluded, actually revolved; the motion of sunspots proved it.

Galileo’s discoveries in 1609 and 1610 – the result of making improvements to a device invented by Johannes Lipperhey, a German spectacles maker working in the Netherlands – led to an explosive growth in astronomy.

At a deeper level, it caused humans to reconsider their place in the universe and forced the Catholic Church to confront what it held sacred in its understanding of God’s creation.

“The great thing about the discoveries is that they really did change the way we look at the universe,” said Jesuit Brother Guy Consolmagno, an American working on the staff of the Vatican Observatory headquartered in Castel Gandolfo, Italy, near Rome.

“The biggest lesson for people of faith today is to realize that everything we know is true, but the universe is far more complicated than we believe,” he told Catholic News Service.

Prior to turning to astronomy, Galileo, a devout Roman Catholic born Feb. 15, 1564, was a mathematician and a physicist. Had he not been motivated to improve upon Lipperhey’s first telescope, the mathematics professor still would be considered a major contributor to understanding the laws of motion. His experiments at the Leaning Tower of Pisa in the early 1590s showed that objects of different weights fall at the same speed when dropped from the same height.

Astronomer Gerry Williger of the University of Louisville in Kentucky said Galileo was a scientist’s scientist, one who would test theories extensively and trust that his observations revealed valuable information.

“He was a good experimental physicist, so it was natural for someone like him to say, ‘Oh, here’s a new piece of equipment. Let’s take a look at it.’ He saw an opportunity and he took it,” said Williger, a Catholic.

It was in 1609 that Galileo learned about Lipperhey’s invention of a year earlier. Galileo, who chaired the mathematics department at the University of Padua, set out to develop his own device that could magnify distant objects more than the two or three times that Lipperhey’s could. Galileo’s first attempt led to a telescope of about eight power. A few months later he had designed one to magnify objects 20 times.

When the Italian mathematician turned it toward the heavens, he began tracking what became known as the Galilean moons revolving around Jupiter: Io, Europa, Ganymede and Callisto. His observations led him to conclude the earth was one planet among several revolving around the sun, giving credence to the heliocentric – sun-centered – planetary system proposed by Catholic astronomer Nicolaus Copernicus nearly a century earlier.

Like any good scientist, Galileo began to share his findings and he became a celebrity across Europe. In 1611 he traveled to Rome to demonstrate the telescope to Jesuit astronomers, who confirmed his celestial discoveries. He was warmly welcomed by Pope Paul V.

As time passed, however, Galileo’s views posed a dilemma for the magisterium, the church’s teaching authority. What he espoused contradicted Scripture, which placed earth at the center of the universe. If earth, the home of beings created in the image and likeness of God, was no longer the center of the universe, then it would force the church to reformulate its theology.

What irked church officials, explained Frank K. Flinn, adjunct professor of religious studies at Washington University in St. Louis, was not so much what Galileo was saying, but how he was saying it. At one point, in his typically self-righteous way, Galileo said that the church should stick with helping people get to heaven rather than explaining how the heavens worked.

“Galileo was correct but not tactful,” said Flinn, a former Franciscan seminarian.

“The magisterium gets very, very sensitive about laypeople interpreting Scripture. This is what got the hackles up of the magisterium,” he said.

Church criticism of Galileo’s views arose from time to time. In December 1614, Dominican Father Tommasso Caccini of Florence criticized Galileo’s conclusions in a sermon. Although the priest’s superior sent Galileo a written apology and the priest was deposed by the Roman Inquisition, the criticism put the scientist on notice that he was rankling some clergy.

Fifteen months later a papal commission issued an edict against the Copernican theory. Afterward, Cardinal Robert Bellarmine delivered the equivalent of a modern day cease and desist order to Galileo to stop talking about heliocentricity.

It was 16 years before Galileo heard from church authorities again. Under Pope Urban VIII, elected in 1623, the church was more open to the Copernican model. Galileo, who greeted Pope Urban after his election, continued to explore the night sky and report his discoveries. However, it was his “Dialogue Concerning the Two Chief World Systems” – published in 1632 after more than five years of development – that led the church to act.

Galileo arrived in February 1633 and underwent questioning from the Inquisition for four months. Although he appealed to his inquisitors to allow his work to continue being disseminated, Galileo eventually agreed to recant his views in order to receive a lenient sentence. Found guilty of heresy, he was placed under house arrest in his villa in Arcetri, near Florence.

In 1637, Galileo became blind, the result of years of solar observations. He died at his villa Jan. 6, 1642, at the age of 77. It would be another century before the Copernican theory was proven.

It took 350 years for the church to reverse itself in Galileo’s case. In October 1992, Pope John Paul II formally acknowledged that the church erred when it condemned Galileo.

In honor of the 400th anniversary of Galileo’s first use of the telescope to view night-sky objects, the astronomical community has organized events around the world to celebrate the International Year of Astronomy 2009. The Vatican has joined in the observance by sponsoring symposia and programs exploring advances in astronomy.

In October, an exhibit of historical astronomical instruments opens at the Vatican Museums. In November the Pontifical Academy of Sciences is participating in a study week on astrobiology in a program looking at life in the universe and the search for extraterrestrial life.

Meanwhile, the staff of the 118-year-old Vatican Observatory continues to conduct research at the frontiers of astronomy. In addition to a facility at Castel Gandolfo, the Vatican Observatory Research Group, hosted by the University of Arizona, studies deep-sky objects with the modern Vatican Advanced Technology Telescope on Mount Graham in southern Arizona.

For scientists such as Brother Consolmagno, Williger and Karen Lewis, visiting professor in physics and astronomy at Dickinson College in Carlisle, Pa., the astonishing astronomical discoveries that began with Galileo and continue today with far more complicated instruments show God’s magnificence. Each new discovery poses no conflict with the trio’s Catholic faith.

“I look out there at the universe and even though I understand how it can all work together, it’s still mind-boggling that it works,” Lewis said.

Lewis and her colleagues know there remains much more to learn about the universe.

“Part of me feels like it wouldn’t be any fun if we understood everything,” she said. “It’s interesting to think God gave us this awesome puzzle to figure out.”