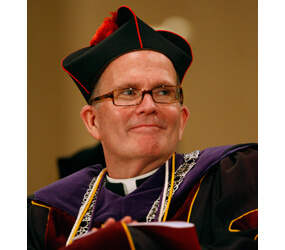 WASHINGTON – Vincentian Father David M. O’Connell, president of The Catholic University of America, announced Oct. 2 that he notified the university’s board of trustees he has decided to step down as president next August.

The priest, who is in his 12th year at the helm of the university, indicated he is considering several opportunities for the future but has made no specific commitments.

“That I have had the privilege of serving as the 14th president of The Catholic University of America is an experience that I shall treasure as long as I live,” he wrote in his monthly newsletter to the university community.

“As I reflect upon my tenure and service at the helm of the national university of the Catholic Church in our country,” he said, “I feel a profound sense of gratitude for what we are and have become and what we do – thanks to the dedication, commitment and hard work of so many people here – and for the many lives we have touched in so many ways over the years.”

Detroit Archbishop Allen H. Vigneron, chairman of university’s board of trustees, will chair the search process for finding a successor to Father O’Connell, and will be assisted by fellow trustee Paul Chiapparone of Palm Beach, Fla.

According to a university news release, the board hopes to have a new president in place by Sept. 1, 2010.

In a statement, Archbishop Vigneron said the university’s trustees “are deeply indebted” to Father O’Connell for his 12 years of devoted service to the national university of the Catholic Church in the U.S.”

“He has achieved notable success in advancing the university’s mission of truth as it is known by faith and disclosed to natural reason. He will leave CUA a stronger and more vibrant institution, poised for a great new chapter in its history,” he said.

“During his tenure he brought the university to a renewed sense of its Catholic identity and a high level of academic achievement. I rejoice that he also focused on the quality of student life, promoting the appreciation of students for their faith,” said Washington Archbishop Donald W. Wuerl, university chancellor.

A member of the Eastern province of the Congregation of the Mission, known as the Vincentians, Father O’Connell at age 42 was unanimously elected president from among more than 100 candidates in March 1998, becoming the second youngest president in the university’s history.

He is currently its second longest-serving president and is also second in seniority among the presidents of colleges and universities in the Washington area.

In April 2008 Father O’Connell hosted Pope Benedict XVI at the university during his trip to the United States.

“His pastoral visit here, with all my fellow Catholic college and university presidents was, without a doubt, the highlight of my academic career,” said the priest.

Pope Benedict’s message during his visit to the campus was that every Catholic educational institution is a place to “encounter the living God who is Jesus Christ.”

“The power of faith and truth creates our Catholic identity and we should not, we cannot, we must not turn away from it because of what it demands of us in the midst of a world that wants us to be anything but what we are,” Father O’Connell said in April during a Mass to commemorate the first anniversary of the pope’s visit.

In his inaugural address 12 years ago, Father O’Connell committed himself to reinvigorating the university’s Catholic identity, strengthening campus ministry and student life. He has been recognized nationally for that commitment.

During his presidency, the university has witnessed record growth in enrollments, fundraising and its endowment; construction of a university center and three new residence halls; the addition of a fitness center; major renovations of numerous campus buildings; the introduction of multiple smart classrooms and wireless technology; and major improvements in the campus landscape and athletic fields.

He has lived on campus during nearly all of his tenure and is known for walking all over campus, following what he calls a “‘management by walking’ approach to administration.”

According to the university, Father O’Connell has always made a special point of interacting with undergraduate students, listening to their concerns, visiting them when they are sick or accompanying them to events.