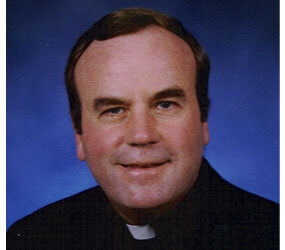 WASHINTON – A Mass of Christian Burial was scheduled to be offered Nov. 3 for Jesuit Father Allen Paul Novotny, a Baltimore native who left a mark on Loyola Blakefield, his prep alma mater, and Loyola University Maryland.

At the time of his death, Father Novotny, 58, was the 34th president of Gonzaga College High School. He died suddenly Oct. 26.

Although friends recall Father Novotny as an avid bicyclist in good physical condition, a spokeswoman from the District of Columbia’s medical examiner’s office reported to the Washington Post that he died of hypertensive and atherosclerotic cardiovascular disease.

Father Novotny attended Sacred Heart of Jesus School in Highlandtown. He graduated from Loyola Blakefield and then Fordham (N.Y.) University. He returned as a Jesuit Scholastic to Loyola, where he taught American History and was Dean of Studies from 1976-79.

He served as director of campus ministry at Loyola University from 1983-89. Father Novotny took his final vows as a Jesuit in 1990 and returned again to Loyola Blakefield, where he taught and served as rector of the Jesuit community until 1994.

In 1994, he became president of Gonzaga, an all-boys high school in Washington. Father Novotny led the Jesuit school’s first-ever capital endowment fundraiser, which raised more than $20 million. Gonzaga officials said he was in the beginning stages of the third phase of his campaign when he died.

Jesuit Father Thomas Clifford, rector of Gonzaga’s Jesuit community, was a classmate of Father Novotny’s at both Loyola Blakefield and Fordham. In his work, in his meetings with parents and students, and especially in his writings, Father Novotny was “always trying to point us to the larger good,” Father Clifford said.

Father Clifford remembered his friend excelling in Latin and English, and as an editor of a student newspaper, demanding precise prose from his fellow students. Father Clifford recalled that Father Novotny also had a softer side, as he planted and tended to flowers around Gonzaga’s campus.

Father Novotny earned a bachelor’s degree in history from Fordham, a master’s of divinity from the Weston School of Theology in Cambridge, Mass., and masters degrees in pastoral counseling and business administration from Loyola University. He spent one year in graduate studies of German history at the University of Heidelberg in Germany.

Burial was to take place Nov. 4 at the Woodstock Jesuit Cemetery.

This article appears courtesy of The Standard, the newspaper of the Archdiocese of Washington.