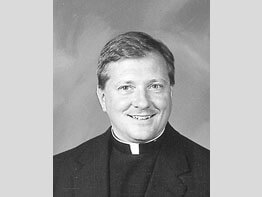 Archbishop Edwin F. O’Brien has appointed Father Kevin A. Mueller, a Baltimore area native who spent the last two years at St. Mary in Hagerstown, as the new pastor of Church of the Holy Apostles, Gambrills.

For Father Mueller, it is a return to the eastern vicariate, where he has spent most of his 48 years.

A 1978 graduate of Loyola Blakefield, Towson, Father Mueller interspersed his undergraduate studies at what is now Towson University with a job as a bank teller. In 1986, he entered Mount St. Mary’s Seminary in Emmitsburg, and was ordained in 1992.

He spent five years as an associate pastor of St. Joseph, Cockeysville, and four years at Our Lady of Mount Carmel, Essex. He knew eastern Baltimore County well, as his father and grand-father had operated a building supplies store on Eastern Avenue.

From 2001 until 2006, Father Mueller served at the Monsignor O’Dwyer Retreat House in Sparks. In 2006, during a sabbatical by Monsignor Arthur F. Valenzano, Father Mueller spent six months as the temporary administrator of St. John, Westminster.

Father Mueller has spent the last two years as pastor of St. Mary, Hagerstown, which has a K-8 grade school. Holy Apostles is among the parishes that send students to School of the Incarnation, which is on its grounds.

Holy Apostles was made a parish in 2004, after five years as an independent mission.

“It’s only nine years old, with 400 families,” Father Mueller said. “I’ve passed nearby on my way to Ocean City. It’s new territory for me, but from what I’ve heard and seen, everyone works together.

“Every day, I get wonderful e-mails from people I haven’t even met, welcoming me,” he said.

The pastor’s position at Holy Apostles has been vacant since early this year, when Father Jeffrey S. Dauses moved to the Basilica of the National Shrine of the Assumption of the Blessed Virgin Mary, Baltimore.