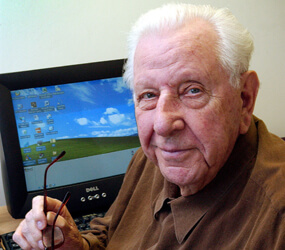 LIGUORI, Mo. – Redemptorist Father Norman Muckerman, a former editor of Liguorian magazine and a former president of the Catholic Press Association, died May 19 at St. Clement’s Health Care Center in Liguori after a long illness. He was 92.

The priest was a member of the Redemptorists’ Denver province, which covers most of the United States and parts of Nigeria, Thailand and Brazil’s Amazon Valley.

A Missouri native who was a priest for nearly 67 years, Father Muckerman was affectionately known to many as “Big Norm,” because of his large physique.

“For members of the Catholic Press Association, Father Norm Muckerman was bigger than life,” said Bob Zyskowski, CPA president and editor of The Catholic Spirit, newspaper of the Archdiocese of St. Paul and Minneapolis.

In a May 20 e-mail to Catholic News Service, Zyskowski said Father Muckerman “earned the name ‘Big Norm’ not merely by his imposing size but by the force of his personality and the size of his heart. He lit up every room he walked into. He commandeered attention every time he took to a microphone.”

Although Zyskowski praised the priest’s work at Liguorian magazine and his tenure at the CPA helm, he noted that “many CPA members will remember him best as a priest who pastored them – myself included – in times of both personal and professional need.”

Father Muckerman was not only well-known in the St. Louis Archdiocese, but in Catholic circles beyond Missouri from his pastoral and missionary work and his 12-year stint as editor of the Liguorian, a Redemptorist national monthly publication. The priest was CPA president from 1981 to 1984 and a year later received the St. Francis de Sales Award, the CPA’s most prestigious honor.

“I’ve had a wonderful ride,” he told the St. Louis Review, archdiocesan newspaper, three years ago after his left leg was amputated above the knee as a result of blood poisoning. “It’s been a wonderful life. I’m grateful to God for what he gave me.”

Jim Doyle, former executive director of the CPA and a syndicated columnist in the Catholic press, wrote a 2007 column praising the priest on the milestone of his 90th birthday.

“He’s a big man, this Father Norm. Tall and broad-shouldered and sturdy-bodied when he was young, but not quite so tall or sturdy anymore, as he got to be near 90. … But he still is, as he’s called himself for years, Big Norm. ‘Have no fear,’ he says. ‘Big Norm is here!’” Doyle wrote.

Father Muckerman, born in Webster Groves, Mo., outside St. Louis, was the oldest of three children. His two sisters, Ann and Rosemary, became School Sisters of Notre Dame. Sister Rosemary died in 2004 after more than 50 years of service to the church.

When he was 13, he began studying at St. Louis Preparatory Seminary. A year later, the archdiocese significantly increased its seminary tuition – from $50 to $350 a year – and his family could no longer afford it. But the priest’s vocational calling was not lost.

After meeting a Redemptorist priest, the young Norm Muckerman visited the minor seminary in Kirkwood, Mo., that the order ran at that time. There he was warmly welcomed and provided with a tuition scholarship.

At the time of his ordination, he looked more like a football player, standing 6 feet 4 inches and weighing 235 pounds. He played all kinds of sports, and continued to follow them passionately even as he grew older.

In 1944, he joined six pioneers who had just established a Redemptorist mission along the banks of the Amazon River in Brazil. Father Muckerman became the founding pastor of Our Lady of Perpetual Help at the mouth of the Amazon River. He remained in the region until 1953. One of his main duties in the jungle was to preach parish missions.

When he returned to the United States, he became pastor of St. Alphonsus Church in Chicago and continued to work at parishes in the Chicago and St. Louis areas until he started work at Liguorian magazine, first as circulation manager, then as editor.

Father Muckerman was the author of numerous articles and books. He also recorded a local radio program every week that offered its listeners practical advice on following the Gospel.