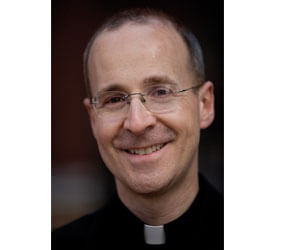 Jesuit Father James Martin is on a mission to get Catholics to lighten up.

Too many people automatically associate being faithful with being dour, he said – exactly the opposite of how Christ and the saints lived their lives.

“Joy is sort of the final end to a faith-filled life,” said Father Martin, culture editor of America Magazine and author of several books including the bestselling “My Life with the Saints.”

“There are many stories in the Bible of heroes and heroines laughing,” he said. “Humor helps us to put life into perspective – and self-deprecatory humor leads to humility.”

This fall, Father Martin will release his newest book: “Between Heaven and Mirth: Joy, Humor and Laughter in the Spiritual Life.” He is set to give a July 29 talk on the same topic as the featured speaker for the 17th annual St. Ignatius Day Lecture in Baltimore. The free talk begins at 7:30 p.m. at St. Ignatius on Calvert Street.

Father Martin knows something about good humor. He is a frequent guest on Comedy Central’s “Colbert Report,” showcasing playful back-and-forth banter with the sharp-witted Stephen Colbert. The New York-based priest has even been dubbed the official chaplain of the popular show.

“They tell you a few minutes before you go on about what the possible questions will be so you can laugh at them and get it out of your system,” Father Martin said, “but you don’t have enough time to formulate a clever response.”

Father Martin, who wears his Roman collar and black clerics every time he’s on the program, deferred to Colbert as the “funny one.”

“There’s no way I can out-joke him,” he explained, “so I just play along and be myself.”

People of faith are sometimes afraid to laugh, Father Martin said, because they misunderstand Jesus. Humor can be subversive, he said, which is why Christ’s natural humor may have been suppressed over the centuries.

“Jesus really delighted in using exaggerations,” the priest said. “The story of finding a speck in another’s eye when you have a plank in your own eye – that’s just being silly. He gives this exaggeration for a little comic emphasis. We miss that because we’ve heard the story so many times we don’t understand it.”

Father Martin’s favorite example of Christ’s humor comes in a Gospel passage where Nathaniel dismisses Jesus by saying, “Nothing good ever came of Nazareth.”

“That’s like saying, ‘nothing good ever came of Boston or Baltimore,’” Father Martin said with a laugh.

Jesus showed his sense of humor, Father Martin said, by inviting Nathaniel to join the apostles rather than rejecting him.

“It also shows that the evangelist had a sense of humor because he kept that in the story,” said the graduate of the University of Pennsylvania’s Wharton School of Business.

Father Martin, who worked for six years in corporate finance and human resources for General Electric before becoming a Jesuit, believes reaching out to believers and non-believers alike through appearances on Comedy Central is a form of evangelization. He also takes advantage of Facebook and Twitter – daily tweeting 140-character homilies that reach more than 3,000 people.

“No media should be beneath us to spread the Gospel,” he said. “If Jesus could talk about the birds of the air, then we can tweet.”

Visit www.catholicreview.org/matysekblog for more on this story.