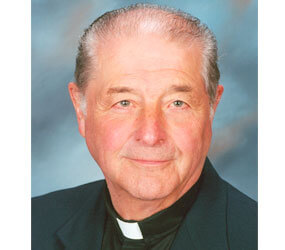 A priest of the Diocese of Peoria whose weekly “Question Corner” columns have been offered through Catholic News Service since 1975 and were later compiled in book form, Father Dietzen had been hospitalized since suffering a heart attack March 6 at his Peoria residence.

Bishop Daniel R. Jenky of Peoria was to be principal celebrant of a funeral Mass at 11 a.m. March 31 at St. Vincent de Paul Church in Peoria. Burial will follow in St. Mary’s Cemetery, Peoria.

Father Dietzen served as associate editor of The Catholic Post, the newspaper of the Diocese of Peoria, from 1957 – when it was known as The Register – until 1973. He is a former board member and secretary of the Catholic Press Association of the United States and Canada.

Following the Second Vatican Council, Father Dietzen in 1968 began a question-and-answer column in The Catholic Post called “The Question Box” to help readers understand the changes taking place in the church.

Letters began coming in on all aspects of Catholic life, ranging from marriage and family issues to ecumenism, Scripture, the sacraments and more. After the column was syndicated by CNS, Father Dietzen would regularly receive hundreds of questions each week.

The purpose of his column – and book compilations which followed, including “The New Question Box” first published by Guildhall in 1981 and the current 560-page “Catholic Q&A: All You Wanted to Know About Catholicism” (Crossroad) – was to help readers “recognize how our Catholic faith, in all its living expressions of worship, faith and service, can enhance (our) intimacy with God,” Father Dietzen wrote in 1997.

“What is very moving and inspiring is the desire that so many people, good people, have to grow in their faith and understanding, to grow in their grasp of their movements with God and prayer,” Father Dietzen said in an interview with the Catholic New World, newspaper of the Archdiocese of Chicago, in 2000. “They’re really wanting to become more intimate in their spiritual lives, with each other, with God, and that surfaces so much.”

Father Dietzen has for years been “the most popular and widely circulated columnist in the stable of Catholic News Service,” said Tony Spence, director and editor-in-chief.

“His great and enduring talent was his pastoral response to the thousands of reader questions he answered over the years,” said Spence. “He never compromised the church’s teachings and always encouraged his readers to look to their parishes and the sacraments for solace. He never forgot that, at the end of the day, it was a human being who put a question in his box and that person required a human answer.”

Gwendolin Herder, publisher at Crossroad, called Father Dietzen “truly a unique author” who “understood that the teachings of the Catholic faith were not merely to be memorized but celebrated as a rich treasure to guide and sustain our lives.”

“What many may not know about Father Dietzen is that he was also a joyful professional,” she added. “He brought a rare combination of commitment and a sense of humor, and we believe this outlook played, and continues to play, a large role in people’s enthusiasm for his work. We will miss his boundless curiosity, energy and infectious love for the people of the church.”

In addition to his question-and-answer compilations, Father Dietzen also was author of two other books: “With Heart and Hand: A Guide to Personal Prayer for the Modern Catholic,” published in 1966, and “Doors of Hope: Paths for Renewal in the Catholic Church” (Templegate, 2009).

Born in Danville on Aug. 19, 1927, to John W. and Margaret (Leven) Dietzen, he attended St. Joseph’s Grade School and Danville High School. After two years at St. Bede College in Peru, Ill., he explored the field of radio and television broadcasting for a time before completing his studies for the priesthood at St. Mary of the Lake Seminary in Mundelein, from which he earned a master’s degree in English and bachelor’s and licentiate degrees in sacred theology.

He was ordained to the priesthood June 6, 1954, by Bishop William E. Cousins at St. Mary’s Cathedral in Peoria.

A former parochial vicar at St. Mary’s Cathedral Parish in Peoria, he served as pastor of St. Mark’s Parish, Peoria, from 1973 to 1983, and of Holy Trinity Parish, Bloomington, from 1983 until being granted senior priest status in 1998.

Father Dietzen also was a pioneer in the areas of pro-life and family life. While with the diocesan newspaper, he served as diocesan director of family life programs, introducing and coordinating new programs such as Cana nights for married couples, pre-Cana for engaged couples and Beginning Experience for the divorced, widowed and separated.

He was founding chairman of the diocese’s Respect Life Board, which oversaw the establishment of the Family Resources Center in 1980, a free-loan library in downtown Peoria offering thousands of books and films to teach reverence for life in all its stages. He also served as chaplain of St. Joseph’s Nursing Home in Lacon from 1968 to 1973.

A retreat master, teacher, lecturer and participant in ecumenical dialogue, Father Dietzen had been episcopal vicar for senior clergy of the Diocese of Peoria since 2002.

In lieu of flowers, memorial contributions may be made to the Father Dietzen Scholarship Fund at Central Catholic High School, 1201 Airport Road, Bloomington, IL 61704 or to the Sisters of the Holy Cross Ministry with the Poor, Development Office, Bertrand Hall, St. Mary’s, Notre Dame, IN 46556.