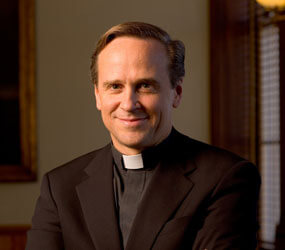 NOTRE DAME, Ind. – Holy Cross Father John I. Jenkins, president of the University of Notre Dame, was elected to a second five-year term Oct. 16 by the university’s board of trustees.

“The vision and leadership that Father Jenkins has demonstrated in his first four years in office have been inspiring and innovative,” said Richard C. Notebaert, board chairman, in announcing the priest’s re-election.

“Building upon the foundation set by his Holy Cross predecessors, he is making the aspirations of this university a reality. The fellows and trustees look forward to continuing our work with him in service to Our Lady’s university.”

Father Jenkins said with the support of the trustees he will continue to pursue the goals he cited at his presidential inauguration in 2005: “offering an unsurpassed undergraduate education, becoming even more pre-eminent as a research university, and ensuring that our Catholic character informs all that we do.”

Earlier this year Father Jenkins came under heavy criticism for his decision to invite President Barack Obama to deliver the commencement speech at the May graduation and to present him with an honorary law degree. The decision also ignited a national debate on the university’s status as a Catholic institution.

At least 70 bishops and other critics said Obama’s support of legal abortion and embryonic stem-cell research made him an inappropriate choice to be commencement speaker at a Catholic university.

Some critics called for the invitation to be rescinded and for Father Jenkins to resign as president. The priest and other university officials stood firm on the decision, saying Notre Dame was not condoning Obama’s support for legal abortion or embryonic stem-cell research, and that students at the university should be honored to have the first black U.S. president speak during their graduation.

In September Father Jenkins announced the formation of a task force “on supporting the choice for life” as a follow-up to the debate over Obama’s appearance on campus.

“Coming out of the vigorous discussions surrounding President Obama’s visit last spring, I said we would look for ways to engage the Notre Dame community with issues raised in a prayerful and meaningful way,” he said in announcing the task force. “As our nation continues to struggle with the morality and legality of abortion, embryonic stem-cell research and related issues, we must seek steps to witness to the sanctity of life.”

In re-electing Father Jenkins, the board of trustees said the priest has advanced the university’s mission “to attain the highest standards of excellence in teaching, scholarship and research in a community of learning where truth is informed by belief and where, specifically, the Catholic faith and intellectual tradition are celebrated and lived.”