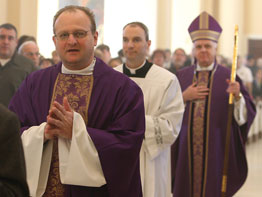 The 23rd rector of the nation’s first Catholic cathedral was installed March 9 before a cheering crowd.

Archbishop Edwin F. O’Brien officially installed Father Jeffery S. Dauses during the 10:45 a.m. Mass at the Basilica of the National Shrine of the Assumption of the Blessed Virgin Mary, Baltimore, which was overflowing with parishioners, friends and family of the new rector.

“Obviously, Father Jeff has a lot of friends,” Archbishop O’Brien said at the opening of the Mass – a remark that drew roaring laughter.

As the new rector of the basilica, the 44-year-old Father Dauses has the task of tending to the needs of parishioners and the hundreds of visitors who flock weekly to the historic mother church of the archdiocese.

During the installation Mass, Archbishop O’Brien advised the Baltimore native to lead with his trademark “charismatic” style, “always be a loving father and shepherd and a wise teacher.”

Ordained to the priesthood in 1990 by Cardinal William H. Keeler, who also attended the installation, Father Dauses grew up in the parish of Shrine of the Little Flower, Baltimore, received a bachelor’s degree from the Borromeo College of Ohio in 1985 and completed seminary at St. Mary’s Seminary & University, Baltimore, in 1989.

Father Dauses’ first assignment as a pastor was the Catholic Community of St. Francis Xavier, Hunt Valley, from 1999 to 2005, and his second was Church of the Holy Apostles, Gambrills, from 2005 to 2008.

“This is an exciting time at the basilica,” said Father Dauses, referring to the reopening of the historic church in November 2006, after a massive two-year, $32 million restoration. “It’s a little intimidating, because of the significance of this place. The basilica is not only an important symbol in Baltimore; it’s an essential icon of faith in the nation.”

“This is a wonderful opportunity for Father Jeff and I know he’s going to be a terrific rector of the basilica,” said Steve Shamblen, 41, of Crofton, a parishioner of Church of the Holy Apostles. “My happiness for Father Jeff – who I consider a friend – is also overshadowed by sadness, because now we’ve lost him as our pastor.”