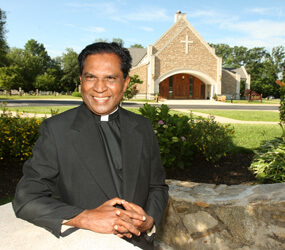 Father Isaac Karoor laughed when asked what he thought about his upcoming retirement. He called to mind a favorite saying from his native India: “The best time to get out of the choir is when you can still sing.”

In the same year he is celebrating his 40th anniversary as a priest, Father Karoor is singing loudly about his love for his vocation and the people of the Archdiocese of Baltimore. After four years as associate pastor of St. Ignatius in Hickory, he will step down July 1.

The 64-year-old author and biblical scholar received permission from Archbishop Edwin F. O’Brien to retire early so he can return to India to take care of his 85-year-old mother who is recovering from a recent broken hip.

“I’m grateful to the Archdiocese of Baltimore for giving me new life,” said Father Karoor, who will eventually return to America. The priest had suffered bouts with depression and had difficulty dealing with culture shock when he first arrived in his new home some three decades ago.

“The archdiocese supported me and sponsored me and placed me in beautiful, large parishes with wonderful people,” he said. “All four parishes accepted me and made me feel welcome. I felt like I touched the soul of America.”

Born in Kerala, India, Father Karoor earned degrees in history and education at Karnataka University and Theophilus College. After his ordination for the Archdiocese of Trivandrum, India, he served as secretary to his archbishop until 1971. From 1972 until 1975, Father Karoor was rector and teacher at a residential high school in the Archdiocese of Trivandrum and served on the administrative board of schools for the archdiocese

At each of his Baltimore assignments, Father Karoor led popular Bible study programs. His great love for the Scriptures was encouraged by a Protestant family member, he said.

Father Karoor wrote a historical novel in 2006 called “The Lost Moonflower,” which tells the story of the first-century church. The priest researched his book in the Holy Land and focused the plot on Phoebe, a woman mentioned in St. Paul’s Letter to the Romans.

Raised in the Eastern Orthodox Church, Father Karoor converted to Roman Catholicism when he was 13. He was inspired to become a priest by the example set by the priestly Order of the Imitation of Christ.

“They were holy men,” said Father Karoor, who practiced the Malankara Rite in his early years of ordained ministry. “They were dedicated to Christ and I wanted to be like them.”

After he returns from India, Father Karoor plans to spend his retirement in Westminister and will help in neighboring parishes. He believes in encouraging Catholics in their faith, and, after witnessing discrimination against women in his homeland, has a special sensitivity to making women feel welcome in the church.

“After Vatican II, I began to look at the church as the people of God,” he said. “I really believe in that.”