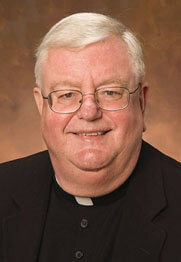 Father Thomas R. Hurst, S.S., a 60-year-old Albany native and alumnus of St. Mary’s Seminary and University in Roland Park, has been named the new president-rector of his alma mater.

The Provincial Council of the U.S. Province of the Society of St. Sulpice (Sulpicians) announced the new seminary leadership May 25, noting that the appointment was made by the Sulpicians with the approval of Cardinal William H. Keeler, chancellor of St. Mary’s.

St. Mary’s was founded by Sulpician priests from France in 1791 as the first Catholic seminary in the United States.

Father Hurst has been the rector of Theological College, the national seminary of The Catholic University of America in Washington, D.C., since 2001. He begins his new role at St. Mary’s on July 1, succeeding Father Robert F. Leavitt, S.S.

Father Hurst told The Catholic Review is “delighted” and “honored” to return to St. Mary’s. In addition to studying for the priesthood there, he served on the faculty from 1980-1992 and worked closely with Father Leavitt as vice rector from 1986-1992.

“I have very big shoes to fill,” said Father Hurst, noting that Father Leavitt’s 27-year tenure saw many accomplishments including the strengthening of the priestly formation program, the construction of the Center for Continuing Formation, the expansion of the Knott Library and the endowing of faculty positions.

“St. Mary’s has a long history of strong faculty and leadership,” said Father Hurst. “I want to continue that tradition of forming priests after the heart of Christ the Good Shepherd.”

St. Mary’s new leader said today’s seminaries are faced with “new kinds of candidates” to the priesthood – men who grew up in an intensely secular society and one that is becoming more multi-cultural.

“The challenge is to inculcate in them an understanding of the Catholic tradition and a deep spiritual understanding to assist them in functioning as priests,” he said.

Prior to his current position at Theological College, Father Hurst was regional superior of the Sulpicians in Zambia, Central Africa, and academic dean of St. Dominic’s Seminary in Lusaka, Zambia. Those experiences helped him gain a “much broader vision” of the church, he said.

With fewer men pursuing the priestly vocation, Father Hurst said he plans to look at ways of boosting enrollment at the seminary and at the Ecumenical Institute. In the coming months, he will visit bishops throughout the country who currently send or previously sent their seminarians to study at St. Mary’s, he said.

“I also hope to talk to vocations directors,” said Father Hurst. “I want to show them what a strong and vibrant community we have at St. Mary’s.”
Father Hurst said he believes there are two “essential” components that make a good priest: a deep love of God as revealed through Jesus and a deep love for people.

“He is a dedicated and loyal priest of the church who is an excellent role model for seminarians,” he said.

Father Hurst holds a doctorate in Semitic languages from The Catholic University of America and has taught New Testament and biblical languages for many years. He was ordained a priest for the Diocese of Albany in 1973 and became a Sulpician in 1976.

Father Hurst said he was “deeply grateful” to his Sulpician superiors, St. Mary’s board of trustees and Cardinal Keeler for entrusting him with the leadership of St. Mary’s.