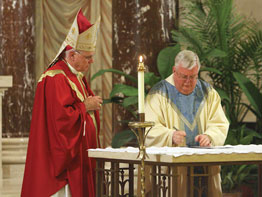 Inside the same chapel where he once worshipped as a seminarian and faculty member at St. Mary’s Seminary and University, Roland Park, Father Thomas R. Hurst, S.S. was officially installed as the new president-rector of his alma mater during a festive Nov. 30 celebration led by Archbishop Edwin F. O’Brien.

Eight other bishops and some 60 priests were present for the Mass, including Father Ronald Witherup, S.S., provincial leader of the Sulpicians – the order of priests who have staffed St. Mary’s since its 1791 founding as the first Catholic seminary in the United States.

Father Witherup read Father Hurst’s letter of appointment near the beginning of the liturgy before Archbishop O’Brien offered the commendation of the new president-rector. During the ceremony, Father Hurst promised to uphold the teachings of the Catholic Church and signed a profession of faith.

In his homily, Archbishop O’Brien said he became acquainted with Father Hurst when as Archbishop for Military Services he maintained office space at Theological College, the national seminary of The Catholic University of America in Washington D.C. Father Hurst was rector of Theological College from 2001 until his appointment to St. Mary’s this year.

“I saw Father Thomas Hurst then, as you are seeing him now, to be a spiritual, pastoral and intellectual leader who fulfills all the expectations, and more, in the Church’s portrait of a solid seminary rector,” said Archbishop O’Brien.

Baltimore’s archbishop, who serves as chancellor of St. Mary’s, called Father Hurst “a well-tested seminary administrator” who follows in a “large and distinguished line of Sulpician rectors.” The archbishop highlighted the ministry of Father Hurst’s immediate predecessor of 27 years, Father Robert Leavitt, S.S., whose long tenure “resulted in the growth of St. Mary’s in so many grace-filled areas,” the archbishop said.

Archbishop O’Brien said a rector’s success depends on the faculty who are dedicated to priestly formation and who “credibly witness to the Gospel in their own lives.” The archbishop said he was convinced that in keeping with Sulpician tradition, the faculty will be “fully dedicated to priestly formation in complete conformity with our Church’s magisterium.”

Delivering his homily on the feast of St. Andrew, Archbishop O’Brien encouraged seminarians to show “selfless” and “total” commitment to the Lord and to be honest with their spiritual directors.

In an interview with The Catholic Review, Father Hurst called it an honor to return to St. Mary’s. A member of the class of 1973 who was ordained for the Diocese of Albany, he served on the faculty from 1980-1992 and worked closely with Father Leavitt as vice rector from 1986-1992. He became a Sulpician in 1976.

The new leader, who took office July 1, said his top priority as president-rector is recruiting more seminarians. He has already met with several bishops around the country about sending their priestly candidates to St. Mary’s and he plans to meet more. There are currently 70 seminarians at St. Mary’s from 18 dioceses including the Archdiocese of Baltimore. This year’s incoming class of 27 is the largest in a decade, he said, and he hopes to expand the enrollment by 20 or 30 students in the coming years.

Today’s seminarians are “deeply impressive men” who show “incredible seriousness” and enthusiasm for the priesthood, Father Hurst said. They include men from South America, Asia and Africa who are studying to serve in American dioceses.

“It’s the gift of Pentecost arriving again on American shores,” said Father Hurst, a former regional superior of the Sulpicians in Zambia, Central Africa, and academic dean of St. Dominic’s Seminary in Lusaka, Zambia.
Father Hurst said he hopes to increase the size of the faculty and recruit more priests with pontifical degrees.