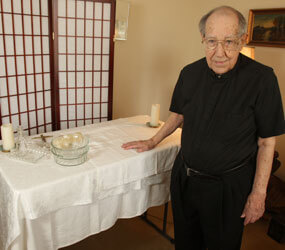 Father Huesman was associate pastor of St. Mark, Catonsville, from 1986-88, and Church of the Resurrection in Ellicott City from 1988-90. He retired from active ministry in 1999 after serving 16 years as a chaplain of Franklin Square Hospital in eastern Baltimore County. He had been a chaplain at The Johns Hopkins Hospital, Baltimore, earlier in his priesthood.

“He certainly met the spiritual needs of the students,” said Good Shepherd Sister Mary Regina Long, local leader of the religious community. “He showed unusual sensitivity. The students always felt listened to and understood at a very deep level.”

As pastor of St. Dominic, Father Huesman founded the Harbel community organization that worked to improve Harford Road neighborhoods. Later, at Ascension, the priest oversaw the building of a new church.

Father Manuel Roman, who had served with Father Huesman at St. Bernardine, succeeded his friend as pastor of Ascension.

Father Huesman, who grew up at St. Pius X, Rodgers Forge, was “very devoted” to his priesthood and those he served, Father Roman said.

“I found him to be very affable,” Father Roman remembered. “He was a quiet priest, but very effective. He didn’t seek publicity.”

Father Brian Rafferty, pastor of Our Lady of the Chesapeake in Lake Shore and one of Father Huesman’s closest friends, remembered that Father Huesman once told him to always remember the words of St. John the Baptist, who insisted that Christ must increase and he must decrease.

“He was every inch the priest,” Father Rafferty said. “He read voluminously and listened to tapes and stayed up with Scripture scholars and theologians – yet he always had the common touch. He was very much ahead of his time.”

In a 2008 interview with The Catholic Review, Father Huesman said he loved to celebrate daily Mass and spend time in prayer – “praying for myself, for family, for whatever the community needs, for victims of natural disasters,” he said.

“I pray for the world,” Father Huesman said. “It’s going to pot!”