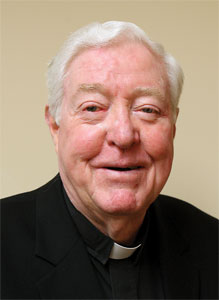 Father Alban Harmon was a junior in high school when he knew he was called to be a Passionist priest.

Fifty years after his ordination, the 77-year-old New Jersey native still has the same passion for the order that inspired him when he was a teenager.

Father Harmon, who will celebrate his anniversary of ordination April 27 at St. Joseph’s Passionist Monastery Church in Irvington with a Mass at 11 a.m. and a reception to follow in the school hall, said when Passionist priests gave a mission at his parish, he was “just attracted to them – the way they preached.”

The most rewarding part about being a Passionist priest, Father Harmon said, has been the spirit of his community. “We stick together and we’ve been through a lot, but we still want to do everything we can.”

The community always maintains a special love and devotion to Jesus Christ, he said. “We’ve seen the great love of Jesus Christ, and his love is with us today. We use that love to bring peace, justice and all the things that the church is working for now to help wherever it may be.”

Father Harmon’s calling as a Passionist priest has taken him across the United States and around the world. He taught at his alma mater seminary in New York for a few years, before moving to Atlanta in approximately 1963 to work with Newman clubs at colleges in the area, including Morehouse College and Spelman College.

After receiving permission from the provincial, Father Harmon traveled to the Philippines in about 1968 to do missionary work.

He spent about 16 years in the Southeast Asian country, learning a local dialect, building churches, traveling along dusty roads, building a seminary, saying Mass – and occasionally walking through rivers that were a few feet deep.

“It was slow going, but the Lord was with us,” Father Harmon said.

Returning to the United States around 1985, Father Harmon worked at St. Agnes Hospital, Baltimore, and spent time in Scranton, Pa. He then spent 10 years working at a parish in Greenville, N.C., at the request of then-Bishop F. Joseph Gossman, a Baltimore native, of the Diocese of Raleigh, N.C.

In 2000, Father Harmon returned to Baltimore. Monsignor Jeremiah Kenney asked the Passionist priest, who has a master’s degree in canon law from The Catholic University of America, to help at the archdiocesan tribunal office. Father Harmon has been there eight years.

With experiences ranging from building small chapels out of bamboo with the locals in the Philippines to participating in marches for justice in Atlanta, Father Harmon has some advice for young priests, seminarians and men and women religious today.

“A lot of sacrifice may be asked of us, but we share, all of us, in the very work of the Lord Jesus,” said Father Harmon. “I think if we answer the Lord Jesus, we’ll make it worthwhile.”